Mickelson “Hopeful” To Return At CareerBuilder 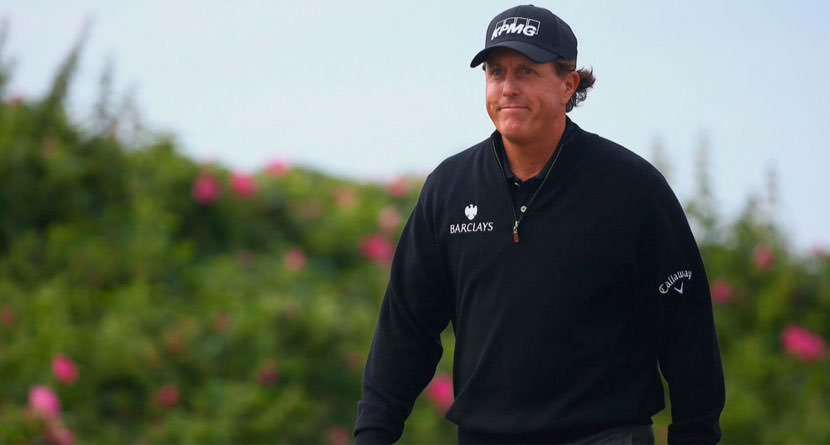 The PGA Tour stipulates that players must commit to the following week’s tournament by 5 p.m. on the Friday previous, so when quitting time came and passed this past week and Phil Mickelson’s name was still on the field list for next week’s CareerBuilder Challenge, more than a few eyebrows raised.

Mickelson was always expected to begin his 2017 schedule in the California desert, but after a sports hernia surgery following the Ryder Cup that needed to be re-repaired in December, his start at the CareerBuilder was put into jeopardy.

Golf Channel.com’s Rex Hoggard spoke with Mickelson’s people about Phil’s name still being on the list of players.

Following two surgeries late last year it seemed doubtful Phil Mickelson would be ready to start his year at next week’s CareerBuilder Challenge, but when the field list was published on Friday the left-hander’s name was on it.

Mickelson took over as “tournament ambassador” of the CareerBuilder Challenge this year, but after two surgeries, in October and December, to repair a recurrence of a sports hernia it seemed more likely he’d begin 2017 at the Farmers Insurance Open.

A spokesman for Mickelson told GolfChannel.com that Lefty is holding a spot in the field for himself and is “hopeful” he can play, but doesn’t know if he’ll be healthy enough.

Mickelson, who last played on Tour in October at the Safeway Open, normally plays a busy West Coast schedule. Last year, the 46-year-old played four events on the West Coast, and he’s missed the CareerBuilder Challenge just once since 2012.

If Mickelson is unable to go, he will be visible as the event’s ambassador. He has also committed to playing in the following week’s Farmers Insurance Open at Torrey Pines.