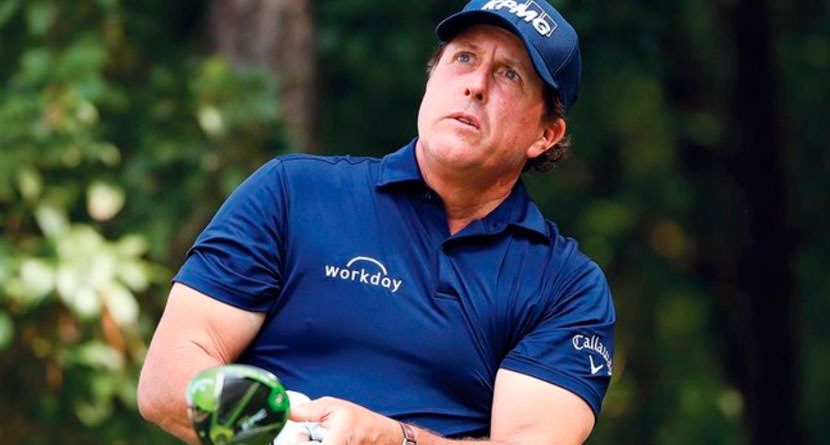 In 2018, Phil Mickelson is trying to be average for the first time in his life.

Having won 42 times on the PGA Tour, including five major championships, “average” has never been a descriptor of Mickelson who has already made his way into the World Golf Hall of Fame and is widely recognized as one of the best players to have ever picked up a club.

However, becoming an average driver of the golf ball is the goal this year as he kicks off his campaign at the CareerBuilder Challenge in La Quinta, California. Lefty is confident he one his way to reaching that middle ground off of the tee thanks to some tweaks to his equipment and offseason prep work.

Strive to be average.

That’s Phil Mickelson’s goal with the driver for 2018.https://t.co/4p5KYVHreJ pic.twitter.com/i5YbTDcr4x

Strive to be average.

Phil Mickelson laughs when asked about his de facto rallying cry for 2018, at least where his historically erratic driving is concerned.

“It sounds bad, it sounds funny,” Mickelson said in a recent interview with SiriusXM PGA TOUR Radio, “but what a great step up that would be for me just to get to average.”

True, that wouldn’t look great on a T-shirt. But the fact remains, Mickelson doesn’t need to magically transform into Dustin Johnson or Rory McIlroy, two of the best drivers in the game. Nor does he expect it. Mickelson just wants to not hurt his cause off the tee, which would mean going from a worse-than-average PGA TOUR pro to an average TOUR pro. If he can do that, Mickelson believes, he could not only win for the first time since 2013, and make his 12th consecutive U.S. Ryder Cup team. He could be due for multiple good years.

Phil’s other big change this year has been his recent switch to Callaway’s new Rogue driver, which Mickelson cites for its bigger sweet spot, and which, he believes, has been adjusted to a more optimal swing weight for him.

Mickelson is a legendary equipment junkie, and hope always springs eternal at the outset of the CareerBuilder Challenge. But if anyone has been around long enough, and experienced enough success—42 TOUR wins, including five majors—to know his game, it is him. He says he spent much of his off-season in the gym, getting stronger for stability and speed, and planned to rejoin his coach, Andrew Getson, last week to start sharpening his skills for his 2018 debut in the desert.

In two starts so far this season, at the Safeway Open (T3) and World Golf Championship-HSBC Champions (T15), Mickelson is -.434 (194th) in strokes gained: off-the-tee. Last season he was at -.058 (119th) and narrowly missed qualifying for the TOUR Championship, a hiccup for which his Presidents Cup teammate Matt Kuchar teased him mercilessly.

To put it mildly, Mickelson has work to do.

“What’s funny is when you’re good at something, chipping, putting, wedges, distance control, all that stuff, it’s easy,” he said. “It takes me a day or two of practice to get back to kind of an elite level. But to become just an average driver when you’re not good at it, it takes a lot of work. And that’s what I’ve been spending the last few years on, really trying to figure it out. Get the swing plane right, get shallower into the ball, get the weighting of the driver right. The whole mental approach to the driver. Just to get everything dialed in just to be average.”

It’s a strange rallying cry, partly because no one has ever accused Phil the Thrill of being average at anything. But maybe that’s what it will take for him to get back to hoisting trophies again. He certainly still looks like a winner, as when he went 3-0-1 to lead the U.S. at the Presidents Cup, his 12th straight, at Liberty National last fall.

There would be no better place to restart the victory count than the CareerBuilder.

“I just don’t want to give away shots off the tee,” Mickelson said. “I don’t need to gain shots off the tee; I’ll gain them elsewhere. I feel like the short putting has been addressed. I feel like, and believe, that I’ve had a bit of a breakthrough with the driver. And if that happens, I think 2018 could be a remarkable year, a year where I can win multiple times.”