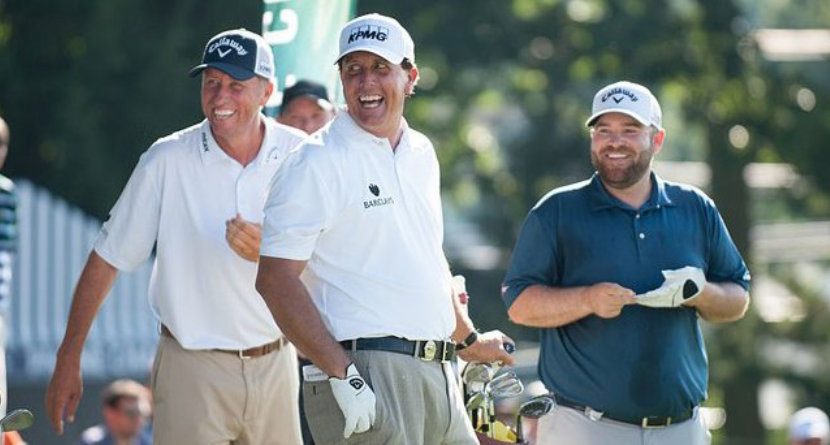 Phil Mickelson’s Tuesday money games have been well documented over the years. Like any alpha male, he doesn’t just take pride in taking people’s money, he wants all of it. While the golf course may be his stomping grounds, he’s no stranger to the card room either. However, the odds of winning cash off of him there seems much greater after the story fellow tour pro Colt Knost shared recently on our friend Adam Fonseca’s Golf Unfiltered podcast.

You need to listen to the whole interview because there are a few nuggets in there that are gold, especially the Charles Barkley story, but at the 27-minute mark is when the 2007 U.S. Amateur champion delved into a quintessential Phil moment.

Knost was minding his own business at the Madison Club in La Quinta California when he ran into Phil who apparently wanted to play a quick match. Knost, who was 22 years-old at the time, told him he didn’t even have his shoes to which Phil replied “I don’t care. Grab your clubs. Me and you, nine holes for $1,000.”

Knost self admittedly said he didn’t want to show Phil he was scared, so he went out and got whipped 4&3. It was after the round where things got interesting.

“I hear you like to play cards,” Mickelson said. “Alright, well, let’s go, I’ll give you a chance to win it back.”

According to Knost, he took about $1,400 in 25 minutes playing gin against Mickelson, who then asked him to stick around for dinner and more cards.

“Needless to say, the night went very long and it worked out pretty good for me,” Knost said, “and he won’t play me in gin anymore.”

“Anytime I beat Phil out of money, it’s a good bet,” Knost said. “He’s my favorite to beat even though he’s beat up on me quite a few times.”