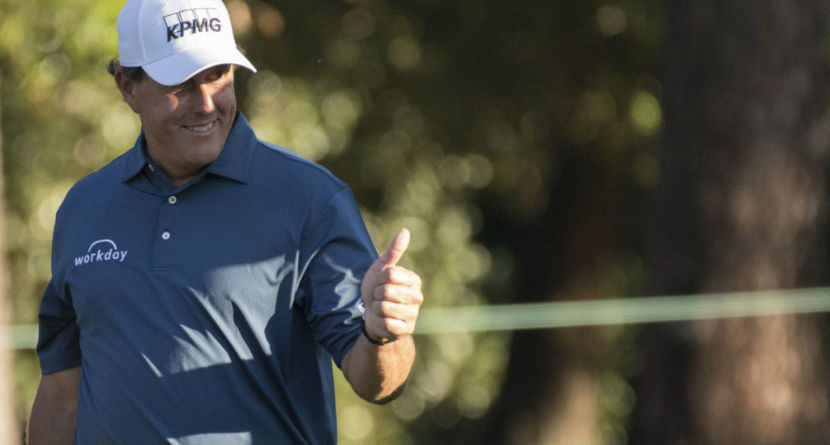 The golf world is still buzzing about the instantly infamous ruling that occurred on Sunday in the final round of the LPGA Tour’s ANA Inspiration, their first major of the year. Lexi Thompson was blindsided by a four-stroke penalty due to a ball-marking rules infraction that a TV viewer called from Saturday. Ultimately she fought back but went on to lose in a playoff to So Yeon Ryu.

One such player to discuss the matter was the always politically correct Phil Mickelson. On Tuesday at his Masters press conference, Lefty was asked to comment on the situation. At first, he declined to comment, then he pulled the rip cord.

“I know a number of guys on Tour that are loose with how they mark the ball and have not been called on it,” Mickelson said, according to a Golf Channel report. “I mean, they will move the ball two, three inches in front of their mark, and this is an intentional way to get it out of any type of impression and so forth and I think that kind of stuff needs to stop. But I think it should be handled within the Tour.”

Loose! Classic Phil. Essentially he called out players for cheating in the most diplomatic way possible. Then Lefty made a point to say that the ball marking issue needs to be addressed at the professional level and then gave an alternative way of approaching the Thompson fiasco.

“That should have been handled within the LPGA saying, ‘Hey, look, you’re a little lax in how you’re marking the ball. You need to be careful. Here’s a warning and let’s go from there,’” he said. “But to have a tournament be decided like that, with all the scenarios going around, as far as viewers calling in, as far as it being a 1‑foot putt with really no advantage, just a little bit of loose marking, I just think it should be reversed. I think that she should be given the trophy.”

Speaking of reactions, here are some high profile golfers (and one celebrity/golfer) who expressed their displeasure with how the LPGA handled the situation on Sunday when the events unfolded.

Viewers at home should not be officials wearing stripes. Let’s go @Lexi, win this thing anyway.

Whatever number this is that people can call in, it needs to go away. Hoping it doesn’t cost @Lexi! https://t.co/wtKkU9pg2o

Who’s watching what is happening to @Lexi @LPGA? Can’t believe this is happening. A viewers calls in a rule a day late or ever…. Not right

???@Lexi is SO CLASSY. Handled that with grace and fight. Career defining moment. https://t.co/CEzHlckCpE