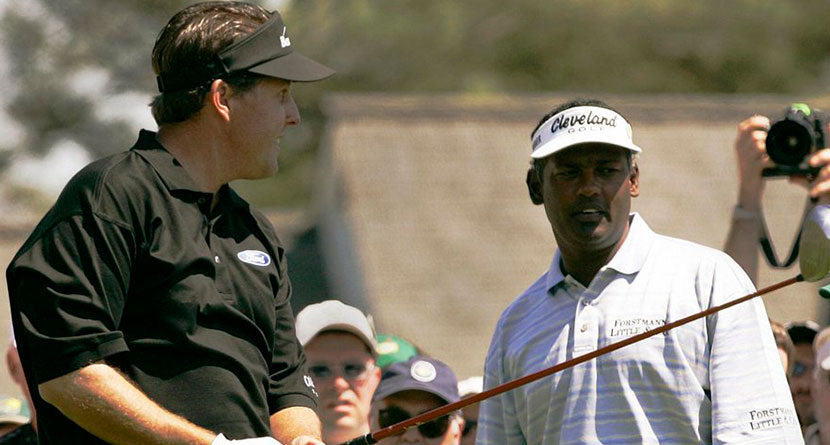 In perhaps the most trivial example that the world is slowly creeping back to normalcy, a seemingly-manufactured outrage sprung to life last week as pros, media and fans got varying degrees of upset over the fact that Vijay Singh had entered a golf tournament.

The backstory: Singh, the 57-year-old Hall of Famer who has notched 64 professional wins around the world and made over $70 million in PGA Tour earnings alone, entered The Korn Ferry Challenge, the first scheduled event back on the PGA Tour’s developmental circuit next month at TPC Sawgrass’ Dye Valley Course.

Without an avenue into the Charles Schwab Challenge, the PGA Tour’s event scheduled for the same week, and without a PGA Tour Champions event on the schedule, Singh opted to enter into the KFT event, into which he was exempt.


This rubbed some people the wrong way, including current KFT pro Brady Schnell who unloaded on Singh in a series of tweets that labeled Singh, among other things, as “selfish,” a “turd” and a “true piece of trash.”

Interestingly, the feeling that Singh was “taking a spot” from a deserving young up-and-comer was rejected by an equally-indignant crowd who supported the move.

For the millionth time, all together now: No player can “take a spot” from another player in a tourney. By definition, if they could, then that spot was never theirs. The answer to this problem is the same answer to 99% of golfer-related problems: Play better.

Interestingly enough, among those coming to Singh’s defense was a contemporary who admittedly doesn’t have the warmest of relationships with The Big Fijian: Phil Mickelson.

Responding to a Tweet sent out by Golf Channel’s Morning Drive in which a panel debated “whether Singh is entitled to play or if he should allow that spot to stay available for a current Korn Ferry Tour player.”

It’s no secret VJ and I aren’t close, but I’d like to say on his behalf that in addition to being a member of the HofF, he’s a big part of the PGA Tour’s success which financially subsidizes, and always has, the KFT. He has earned the right to play when and where he wants.

“It’s no secret Vijay and I aren’t close, but I’d like to say on his behalf that in addition to being a member of the (Hall of Fame), he’s a big part of the PGA Tour’s success which financially subsidizes, and always has, the KFT,” Mickelson wrote. “He has earned the right to play when and where he wants.”

The Korn Ferry Challenge is slated to begin on June 11.