Mickelson Hits A Driver Out Of A Bush In Vegas 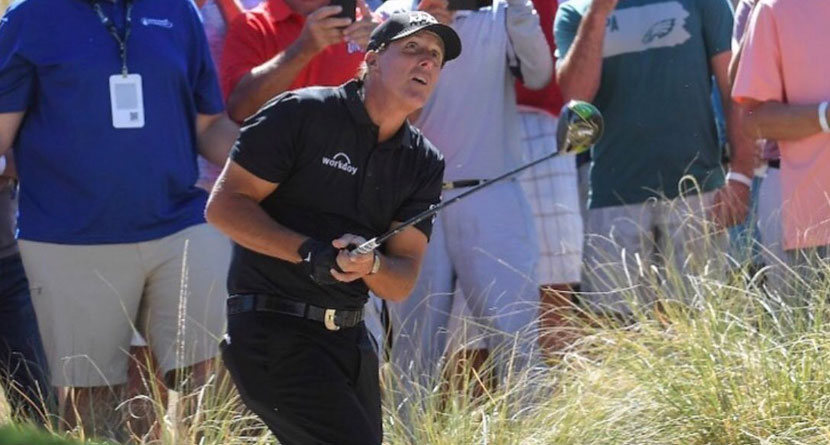 Phil Mickelson may look like a completely different person thanks to his dramatic physical transformation, but his swashbuckling style of play is as entertaining and impressive as ever.

Both Mickelson’s new physique and his trademark style of play were on display at this week’s Shriners Hospitals for Children Open as he made his first cut of the young 2019-20 PGA Tour season in Las Vegas.

After two rounds, Mickelson had improved upon his missed cut performance the week before at the Safeway Open thanks in part to a “sensational recovery” shot from the gravel left of the cart path on the dogleg-right par-4 second hole at TPC Summerlin.

With over 200 yards to the green, a stance on the path and a lie in the gravel, Mickelson pulled off a shot that would have be impossible for anyone other than him and perhaps Bubba Watson.

He would go on to make par and shoot 2-under par 69 in the second round to get within four shots of the lead.

A third round of 3-over par 74 dropped Mickelson from the Sunday conversation, but it didn’t lack entertainment. Playing the par-5 ninth hole, Mickelson again lost a drive to the left of the fairway on a dogleg-right hole. This time, instead of finding gravel near the path, it got held up in a bush.

In a spot where 99.9% of golfers would take an unplayable lie, Mickelson did the unthinkable — he pulled the headcover off of his Callaway driver and took a slash at it. Las Vegas real estate appraiser Vance Randall caught the shot live.

Driver from the bush! @philmickelson sends it! Must be the calves #pgatour #golf #shrinersopen

Mickelson advanced the ball some 200 yards back into the fairway, leaving himself 60 yards into the green.

Mickelson bounced back from his disappointing third round to shoot a final-round 4-under par 67 to finish in 61st place.

“I came out and had two good rounds out of four,” Mickelson said. “I didn’t obviously compete, but the road back to playing well is a process, and today or this week was a good start on that process, and I’m looking forward to going to Korea (for the CJ Cup) and continue improving. I identified a few areas to continue to work on, but there were some areas of strength as well. It was a good week, and I’ll look to build on it.”