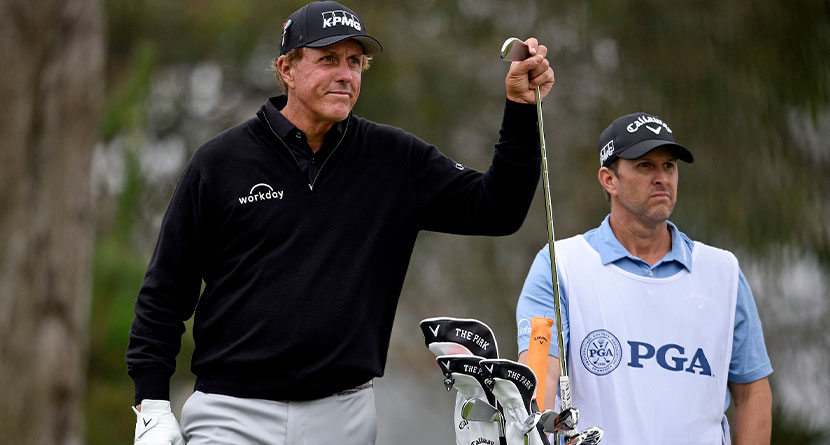 If Phil Mickelson would have had his way, he would have played his way through the FedEx Cup Playoffs and into form heading into the second major championship of the year and the site of his biggest letdown among six U.S. Open runners-up.

Instead, entering The Northern Trust at 67th in the FedEx Cup standings, an opening-round 74 sunk his chances of advancing to the second leg of the three-part Playoff series this week outside of Chicago. His missed cut dropped him outside of the top-70 who advance to the BMW Championship,

Instead of heading to Olympia Fields for the second leg of the Playoffs, Mickelson decided to make an interesting detour some 550 miles southwest to Ridgewood, Missouri where he will make his PGA Tour Champions debut at the Charles Schwab Series at Ozarks National, which begins Monday.

In new-age Phil fashion, Mickelson broke the news publicly to a Twitter fan page dedicated to tracking his rounds as it attempted to sign off for the season.

I’m going to play the Champions event this Monday. I’ve been playing well and I want to play. I wish I was playing in Chicago next week but excited to play my first Champions event.

Mickelson then spoke to the media about his decision to tee it up on the over-50 circuit for the first time two months after his 50th birthday.

“I love playing and competing, and heading into the U.S. Open, I’ll play the week before in Napa, but I didn’t want to have two weeks off when I’ve been working hard on my game. I was really wanting to play and compete in the playoffs, so it was a disappointing first round and it’s fun for me to have a chance to come play.

“This worked out really well. It’s such a beautiful place. I’m a big fan of Bill Coore (and) Ben Crenshaw golf course designs, and we are here playing one of the best. And it’s a beautiful area, so I’m excited to compete.”

The Monday-Wednesday 54-hole event will feature some familiar faces for Mickelson, who will play alongside Steve Stricker and Retief Goosen. Fellow fresh-faced rookies Ernie Els and Jim Furyk are in the field as is former Masters champion Mike Weir and former Players champion K.J. Choi.

Confirmed: Bombs will be coming to PGA TOUR Champions.

While Mickelson will immediately be among the favorites to win, he knows what he’s up against.

“It’s a whole other thing against tough competition to shoot low scores,” Mickelson said. “It’s not going to be easy. I want to get my game sharp. I know how good the players are. They are phenomenal players and I’m excited to have a chance to compete against them.”

Mickelson, Stricker and Goosen tee off at 3:20 p.m. EST and Golf Channel will have coverage over the next three days from 6-8 p.m.