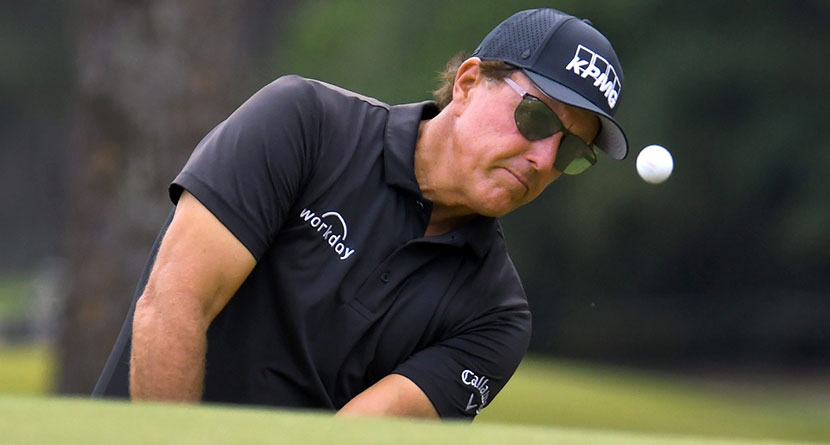 Phil Mickelson’s cocktail of bombs and hellacious seeds has seen its fair share of success in the recent past.

The 51-year-old is the reigning PGA Champion and a three-time winner on the PGA Tour Champions, with his third victory coming just two weeks ago at the Constellation Furyk and Friends, so there’s definitely something to be said about the quest for more distance he’s embarked upon over the last few years.

However, even if that plan has been proven effective when he’s got it working, this week’s PGA Tour Champions event showed what could go wrong if Mickelson gets to spraying it off the tee.

Coming into the week, Mickelson shared a simplistic version of his strategy when asked by a reporter about his middling driving accuracy numbers during his recent win at Timuquana Country Club in Jacksonville.

“So, I look at longest, like I try to hit it the farthest out here, and I was No. 1 in driving distance,” Mickelson said Thursday. “That’s the way I look at it. If you want to look at stuff that’s irrelevant, have at it.

Fast forward to the second round of the Dominion Energy Charity Classic at the Country Club of Virginia where Mickelson won in 2020. After a 1-under par 71 on Friday put him 10 shots back of the first-round leader, any thought of playing conservatively off the tee was out the window with birdies needing to be made.

Instead, Mickelson did something that makes you double-check the scorecard to make sure you saw that correctly. On both Saturday and Sunday, Mickelson carded quaruple-bogey 9s on the par-5 9th hole.

Even @PhilMickelson has his senior moments. 🤷‍♂️

He twice made nine on the same hole at the @ChampionsTour‘s Old Dominion Energy Charity Classic: https://t.co/Yw5zCaiDRT pic.twitter.com/z5GnYp30aN

During Saturday’s second round, announcers Lanny Wadkins and John Cook took some shots at Mickelson’s strategy as he blew two tee shots out of bounds, hitting his fifth shot from the tee box.

“In this game, those foul balls count,” Cook said on the Golf Channel broadcast.

“Yeah, but he’s leading the Tour in distance so that’s important,” Wadkins said.

“Good for him, as he lies five on the tee,” Cook said.

The pair of 9s dropped Mickelson well down the leaderboard, as quadruple bogeys tend to do, and despite finishing in a tie for 47th place, Mickelson shared on social media that he’s not changing his strategy.

I probably was a bit off on that statement 😂😂

My thinking is this. I want to win. I don’t care about any other finish.If I drive it long and am 30-50 yards past my opponent, I’m hitting a 9 or wedge to their 5 or 6.Over 3 rounds I will win that fight.If I drive crooked I will lose but I’d like to be in control of the outcome

Mickelson is all or nothing off the tee and it seems as his driving goes, so goes his results, especially on the PGA Tour Champions.

Two weeks ago, it paid off and he left with a trophy. This week, he finished middle of the pack. Just another day in the life of hitting bombs and hellacious seeds.