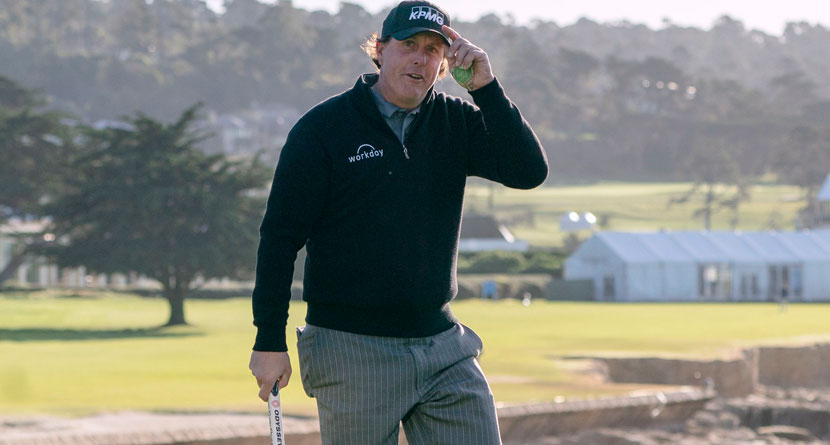 By now we know that if Phil Mickelson finds an open flame, then it’s storytime for the rest of us.

Mickelson found a nice fireplace at the Addison, an up-scale restaurant in San Diego, and decided it was the perfect time to tell a story about one of the most bizarre things he’s ever seen during his three decades on Tour.

Launching into the story, a dapperly dressed Mickelson set the scene.

“Going back to the 1990s, I was playing AT&T and it was late in the day at Poppy Hills when we were playing there,” he began. “It was a par-3. We were waiting for the group on the green in front of us and there were only 15 or 20 people around the tee box.

“There was this guy riding a bike down the cart path. One of the guys in the gallery takes his arm, and as (the bike rider) comes close to him, goes ‘Whack!’ and knocks him on his back.”

I was at Addison’s (best restaurant in SD and has 1 Michelin star) and I saw a fireplace. So I shot a quick Phireside with Phil. pic.twitter.com/jVqhxzcSDJ

“We’re like, ‘oh my goodness, what just happened?’ We’re rushing over there and the guy looks down to him and says, ‘that’s my bike!’

“Earlier in that day, that guy had stolen his bike. He kind of half-dazed looked up, realized that he got caught, pops up and runs away. The guy picks up his bike and rides off.”

While entertaining, there’s not really much of a moral to this story besides don’t steal someone’s bike or else you may end up on your back in front of one of the best golfers on the planet.