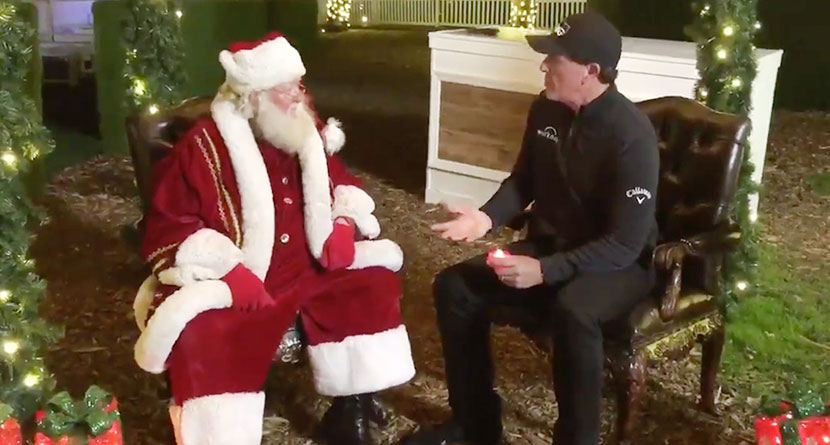 Phil Mickelson appears to be wrapping up his year like many others: with a visit to Santa Claus to talk about his wishlist.

In his latest installment of Phireside With Phil, Mickelson’s social media sit-down series, the five-time major champion stole a few minutes with one of the busiest people on the planet this time of year, Santa Claus.

As you would expect, Mickelson’s visit with Kris Kringle wasn’t a run-of-the-mill encounter. He starts by poking fun at Santa’s Phireside misspelling and then dives into some grilling on why he hasn’t received some of the things that have been on his wishlist in the past.

Throughout my life I’ve been on the naughty and nice list many times. Going to do my best to stay on the nice list in 2020! #PhiresidewithPhil #FairmontGrand pic.twitter.com/ncsPQSSmzG

“I wanted to ask you about the 2018 request when I asked for a U.S. Ryder Cup victory,” Mickelson began. “What happened?”

“U.S. Open. Naughty list,” he said, referring to Mickelson’s infamous putt on the 13th green at Shinnecock Hills in which he chased down and hit the ball while it was still moving.

This probably won’t help get me off the naughty list??#itwasatinypiece#noonewillevennotice#PHILIP pic.twitter.com/9hvREIgDAd

Mickelson apologized and promised it wouldn’t happen again. There weren’t any shenanigans in 2019, so Mickelson received all three of his wishes: a PGA Tour win, good abs and good calves. Going into 2020, Mickelson asked for something that he has referenced in press conferences in the past: to be part of a winning U.S. Ryder Cup side in 2020.

In order to do so, Mickelson used Callaway’s unreleased new driver, the Mavrik, to bribe one of Santa’s elves to keep him on the big man’s good side. While visiting, Mickelson also managed to get in a little major championship prep on the ice rink, rolling some putts to get ready for Augusta National.

After shooting a Phireside chat with my good friend Santa Claus, he was kind enough to help me get ready for Augusta. It’s never too early to start preparing ? pic.twitter.com/pr4t3kmhyQ

“After shooting a Phireside chat with my good friend Santa Claus, he was kind enough to help me get ready for Augusta,” Mickelson wrote. “It’s never too early to start preparing.”