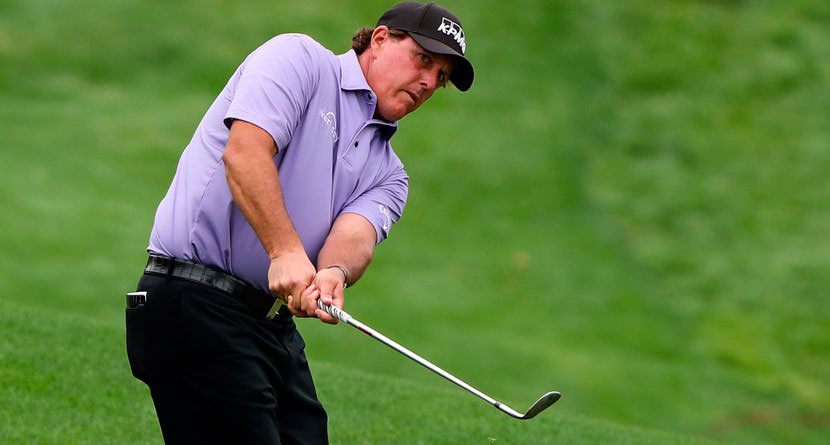 With Phil Mickelson, rarely is anything as it seems; that statement tends to become truer the closer to the green you get with Lefty.

On Sunday at the Wells Fargo Championship, the 5-time major champion took an incredible up-and-down from the creek that runs alongside the 18th hole at the Quail Hollow Club and made it even better when he got a microphone in front of him.

After pulling his approach, Mickelson popped his third shot out of the creek with a peculiar flight on it.

A ? drop lesson from Lefty! pic.twitter.com/kPfeOU8klG

So, what happened? Phil explained.

“It was touching a rock, but somehow I was able to get way underneath the ball,” Mickelson explained. “It was kind of on such a severe lie, I was able to hit it vertically. So I hit it off the toe, and the toe of my wedge is all banged up — not the sole, but the far end of the toe. I semi-played it into the rock to kick it to the right over the pin. So I went up vertically and used the side of the rock to kind of get it to go to the right.”

Of course, this isn’t the first time Phil has seen this type of shot.

Phil Mickelson Hit A Shot From The Hospitality Tent

What made it that much better? Mickelson rolled in the 21-footer for par, which turned out to be worth roughly $40,000. That’s worth a putter drop.

Phil after making par on 18 from the hazard. pic.twitter.com/VorxGfKYpU