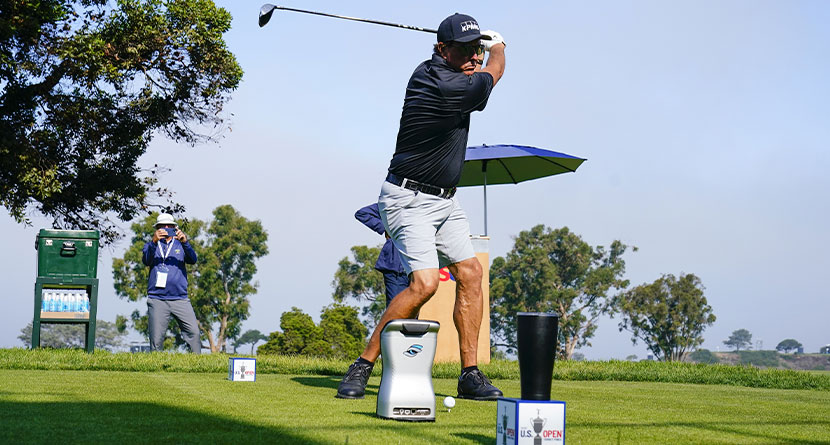 The last time the U.S. Open was held at Torrey Pines’ South Course in 2008, Phil Mickelson showed up without a single driver in his bag in an effort to control his ball off the tee and hit more fairways. That experiment didn’t work.

This week, naturally, he’ll have two drivers in play.

Coming off his success at the PGA Championship in which he gamed a TaylorMade Original Mini One, an 11.5° driver that was designed to offer a mix of control and distance for players who often club down to a 3-wood for more accuracy, Mickelson has once again pivoted to an unconventional bag setup for the U.S. Open.

A few weeks ago at Kiawah Island, Mickelson famously caved in the face of his Mini One driver during the third round and also cracked the face of his 2-iron just before the final round. It didn’t prove too costly as Mickelson was the man holding the 27-pound Wannamaker Trophy on Sunday evening.

This week, however, Mickelson is again employing a mini driver, or a 2-wood, as he calls it, to assist him get the ball into better position off the tee.

Based on photos from Torrey, Phil Mickelson is testing out TaylorMade’s Tour-only 300 Mini Driver. pic.twitter.com/wx1iUo2qNW

“I call it a 2-wood, but it’s a mini driver,” Mickelson said on Monday. “I think at least half, if not a fraction more, of tee shots will be with that club just because the way the fairways are a little bit firmer than Farmers.

“The ball runs out and it gets down there to a pretty good spot. There’s a lot of holes where it kind of turns or tightens, and I don’t really want to get to that spot. If you look at 4, you get it down too far and it starts to pinch in by the canyon. You look at the contour on 7, how much that fairway pitches. I really don’t want to get it down there.

“That 2-wood, I’ll call it, seems to fit the right yardage on a lot of those holes for me.”

Mickelson’s mini driver this week at the U.S. Open will be different than the Original Mini One he was using at Kiawah. Instead, Mickelson is opting for TaylorMade’s newest offering: the 300 Mini Driver.

The 300 popped up on the USGA’s conforming list of driver heads last month.

According to the USGA’s description of the club, it has a 12-position adjustable hosel that allows the 300 Mini Driver to have a loft between 11.5 and 13.5 degrees. There is also a weight in the back of the sole and a Speed Pocket slot that runs behind the leading edge from the heel to the toe, which aids shots hit low on the face.

“I go through a few heads, and this is a different head than I had (at the PGA),” Mickelson said. “But it’s the same loft and same — just about as same as can be.”

He’s looking for a similar result as well.