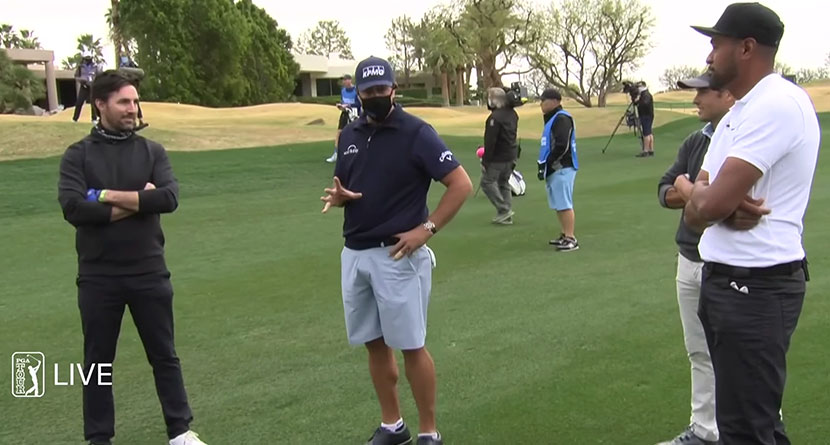 Phil Mickelson has been one of professional golf’s most entertaining characters for the better part of the past three decades.

More recently, Mickelson has shared his gift of gab off of the course as well on social media, in the broadcast booth and on Wednesday, in the role of charity exhibition emcee.

As part of his role as tournament host of The American Express, Mickelson tagged along as Tony Finau and former U.S. soccer team legend Landon Donovan faced off against Paul Casey and country music star Jake Owen on Wednesday in a nine-hole modified alternate shot match play event that would benefit The Mickelson Foundation.

While Mickelson was clearly the most accomplished of all the players in the group, as he put it, “I’m going to watch and talk smack, which is what I do better than play right now,” Mickelson said.

Well within his element, Mickelson clearly had a few stories and zingers up his sleeve, the first of which harkened back to a funny story Owen told a few years ago about Mickelson and Tiger Woods’ $9 million match when the two ran into each other at Jordan Spieth’s wedding.

As the story goes, Owen confronted Mickelson and demanded a refund, tongue firmly in cheek, for the pay-per-view event that Owen called “the sh***iest golf I’ve seen.” Mickelson peeled out a $100 bill and told Owen, “I won 90,000 of these yesterday. Take a 100 and go f— yourself.”

To start the day, Mickelson offered Owen another Benjamin and things were off and running.

The entire round was a masterclass by Mickelson.

Asked by Casey whether this was an audition of sorts for a future career, Mickelson responded, “It’s the first time nobody has said shut up, so I just keep going.”

Here are some more highlights from the day, including Mickelson giving a bunker lesson to Owen and pumping up his own short game video series.

In the end, Casey and Owen took down Finau and Donovan, but more importantly, the foursome, along with the emcee, were able to raise over $1 million for area charities.