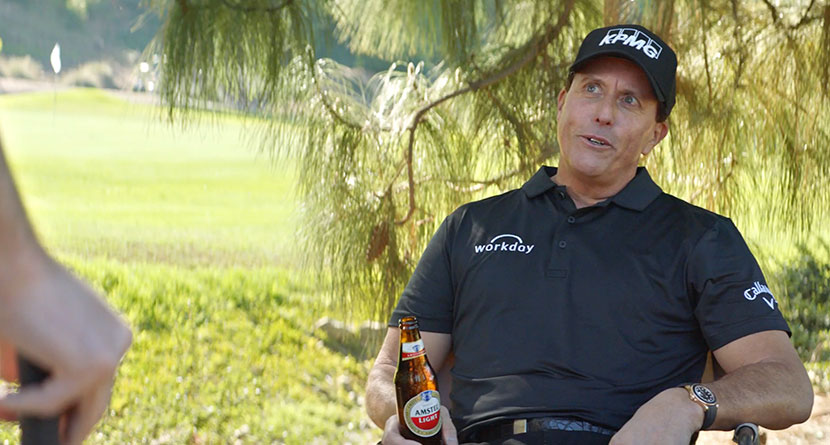 Nearing age 50, Phil Mickelson is as busy as he’s ever been.

Currently in the midst of a five-tournament-in-five-weeks stretch that has Mickelson playing ping-ponging back and forth between California to Saudi Arabia, Mickelson debuted his first commercial for Amstel Light, the beer brand Mickelson partnered with in November of 2019.

Amstel Light, a Heineken subsidiary, entered into a “true business partnership” with Mickelson, according to Quinn Kilbury, Heineken USA head of partnerships and consumer experience, which is aimed at rejuvenating a brand that has been lost in the shuffle of the company’s branding efforts.

Only Amstel lights and only once a month

Mickelson, who holds some sort of ownership stake in the company, is staring in the company’s first advertising campaign titled, “In the Rough with Phil Mickelson,” with the brand launching the first commercial on Wednesday.

Playing off of Phil’s real or self-perceived wisdom, Mickelson is revealed to be sitting in a lawn chair amid trees and shrubs well off the fairway, which is pretty on-brand for Lefty.

From there, Mickelson offers Kevin some life advice about making adult male friends.

“A lot of guys struggle with adult male friendships,” Mickelson says. “I mean, not me. I’m Phil Mickelson.”

Mickelson had a rough start to his year with missed cuts at The American Express and the Farmers Insurance Open, but he seemed to find some form at the Saudi International last week where he finished T3. He opened his title defense this week at the AT&T Pebble Beach Pro-Am with 4-under par 68 at Spyglass Hill, and sits in a tie for 12th place thanks to driving the ball “like a stallion.”

With his new ad campaign rolling out, don’t be surprised when you start seeing Mickelson featuring in contention on the broadcasts as well as in the commercial breaks in between.