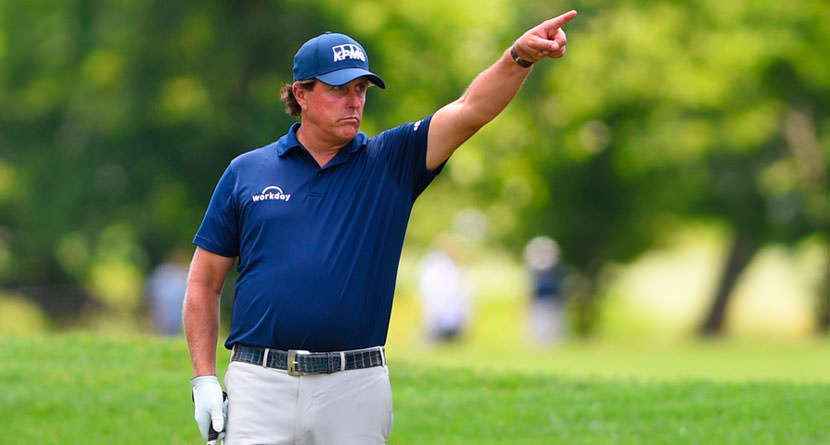 Brandel Chamblee has made a (post-playing) career out of having strong opinions on the game and its players. Naturally, some of the verbal barbs Chamblee has levied rub people the wrong way, both those inside and outside the world of professional golf.

Thanks to a fun profile of Phil Mickelson released this week in an issue of Golf Magazine and available to read on Golf.com, we know exactly where Mickelson stands when it comes to Golf Channel’s lead analyst.

Mickelson tweaks Chamblee: 'He's made his commentating career on denigrating others'

“He and I don’t see eye to eye on anything,” Mickelson said. “I just like people who build up the game. I view this as we’re all in the game of golf together. We all want to grow the game. We all want to make it better. And I feel like he’s made his commentating career on denigrating others. And I don’t care for that. I like people who help build the sport up and promote it for what it is, rather than tearing down and ridiculing others.”

Whether or not there is a history between Mickelson and Chamblee on the course from their playing days is not certain, but there surely is a history as it pertains to Chamblee calling out Mickelson. With Phil being one of the biggest names in the game, it’s only natural that Chamblee would be asked to opine on the left-hander, and in a few instances in particular, Chamblee hasn’t held back.

Most notably, following Mickelson’s call-out of then-Ryder Cup captain Tom Watson after the U.S. defeat in 2014, Chamblee called Mickelson’s statements “as close to a one-man mutiny that I’ve ever seen.

“If you’re looking for a reason why the United States continues to lose, you just saw it in one man: Phil Mickelson. Phil Mickelson, along with the best players of that era, have so corrupted the experience of the Ryder Cup for their fellow competitors by not having records anywhere near what they should, given their rank in the game.”

And most recently following Mickelson’s run of two penalties in the last two events he’s played in, Chamblee questioned Mickelson’s focus and agenda, especially in a Ryder Cup year.

While both men carry tremendous weight in their respective fields, and therefore, bring them within close proximity of one another often, it’s unlikely we’ll see any images of the two buddying up and sharing a scotch at next week’s Open Championship.