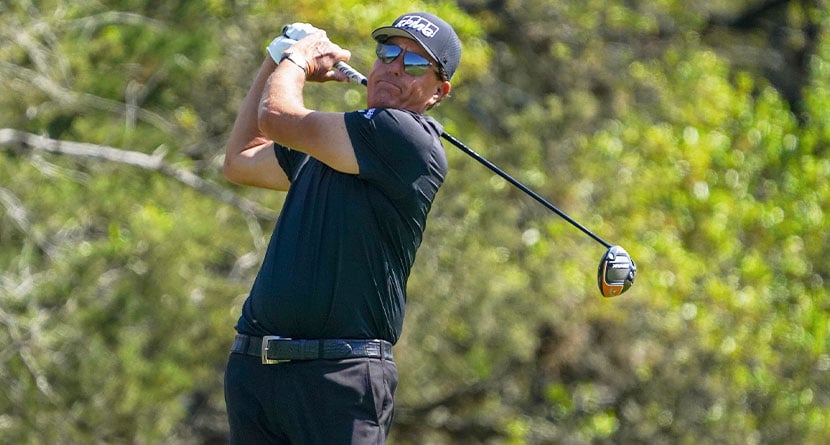 The Valero Texas Open has a history of players making big numbers, and another chapter was added to that book on Thursday by Phil Mickelson.

Playing the week before the Masters as is his preference, Mickelson had a decidedly mediocre first round going at TPC San Antonio when he came to the finishing hole at 1-over par looking to birdie the par-5 to get in the house at even par.

A perfect drive left Mickelson 268 yards into the green, and in his typical swashbuckling style, Mickelson pulled off a headcover to go for the green in two. He overcooked a draw that nearly worked to his advantage, heading up the right side of the fairway before he ran out of real estate.

The ball bounced into the creek that guards the green and then the fun began.

Phil Mickelson recorded a 10 on the 18th hole tying his second highest score on TOUR. pic.twitter.com/fxyX7IMDq1

Mickelson’s fourth shot rolled back into the rocky penalty area, and in trying to extrapolate himself, he whiffed and chunked himself through six more strokes, including a second penalty.

Taking a second drop on the hole, Mickelson hit his ninth shot safely onto the fat part of the green and naturally rolled in the 15-footer for a 10, tying his second-highest score ever recorded on a PGA Tour hole (Mickelson carded an 11 at Pebble Beach in 2008).

Signing for a 7-over par 79, Mickelson will likely be arriving in Augusta a few days earlier than he had previously planned.

Of course, Mickelson’s 10 isn’t close to the highest score ever recorded at TPC San Antonio. That lofty mark belongs to Kevin Na who infamously made a 16 during the 2011 event.