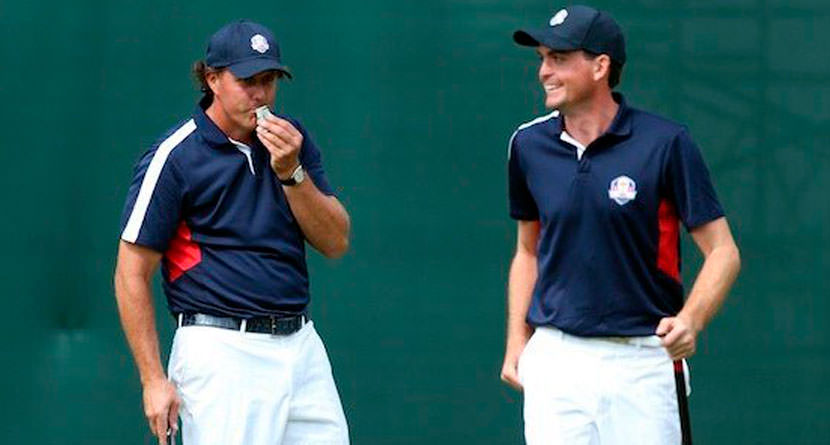 Phil Mickelson is a once in a generation talent, but more than that, he’s a once in lifetime personality. Most of the best Phil stories emanate from some kind of wager, whether it be how he made a few bucks on the set of Tin Cup, his relatively controversial game with up-and-coming amateur Ryan Ruffles or him refusing to accept American currency as payment when playing in the United Kingdom.

However, none of those three gems are Phil’s favorite gambling story. His favorite came prior to the Players Championship when he and Rickie Fowler were facing off with Keegan Bradley and Brendan Steele.

The match started slowly, but Bradley caught a lucky break and took advantage on the 7th hole. His fatted wedge bounced off a sprinkler head 20 yards short of the green and nestled 15 feet from the hole. He made the putt.

“See, this is the day,” Bradley said.

That birdie putt put Bradley and Steele 2 up, and the match stayed that way until the 12th green, when Mickelson decided to play some head games. With Fowler and Steele out of the hole, Mickelson was next to play with a putt 16 feet away. Bradley was 14 feet out. Then Mickelson backed off his putt. “Oh my goodness,” Mickelson said, pausing for emphasis. “This putt is the entire match.”

“And Keegan bit,” Mickelson said. “He goes, ‘Oh yeah, how so?’ Which is what I was hoping he would say.”

Seconds later, Mickelson rolled in his putt. Bradley quick-peeled his on the low-side, just as Lefty said he would.

Steele and Bradley each bogeyed the next hole to square the match, and Fowler and Mickelson made birdies on 15, 16 and 17 to win — you guessed it — 2 and 1.

“I just chuckle about that story every time I hear it,” Mickelson said.

Mickelson said Bradley took a “one-year sabbatical” before coming back and finally finding some success in the Tuesday game.

You can listen to the entire Phil interview, which is worth your time, below.