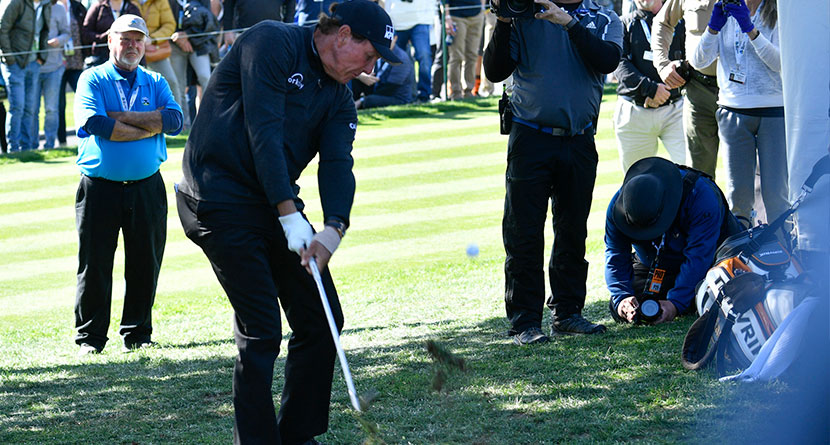 Phil Mickelson’s week at the AT&T Pebble Beach Pro-Am had a little bit of everything.

Over the first few rounds, the story of Mickelson’s week was his newfound obsession with hitting bombs off the tee, but the weekend around the host venue gave fans more vintage Mickelson magic around the greens.

En route to a Saturday 67, Mickelson hit just 9 of 18 greens and needed only 22 putts to fire 5-under par, which was good enough to get him into the final pairing with Canadian Nick Taylor as Mickelson attempted to defend his title from 2019 and win the event for the 6th time.

Phil’s third round included what he deemed his second-best up-and-down ever at the iconic par-3 7th hole. Airmailing the green, his ball one-hopped into the back bunker and sat down in its pitch mark resulting in a fried-egg lie.

After on-course announcer Craig Perks sounded optimistic about Phil getting the shot to 15-20 feet, he went ahead and hit it to two feet.

Some par saves rank higher than others.@PhilMickelson said this one is in his top 5.#QuickHits pic.twitter.com/6Kvjkaiyg2

“That is the shot of the year for me,” Nick Faldo said on the broadcast. “He’s had a million and one up and downs, that might be No. 1 for me.”

A day later, Phil had another up-and-down that could go down as another one of his best ever. Needing to keep the pressure on as Taylor bogeyed two of the first three holes on the back nine, Mickelson found himself two back and facing a 128-yard approach in the 13th fairway. He badly misjudged the wind and distance, sending his ball some 45 yards over the green.

With some tree trouble and a television tower between him and the green, Mickelson pulled another rabbit out of his hat, hitting his recovery shot up and over the obstacles to 25 feet from the pin.

Completing the magic trick, Phil sunk the putt to remain at 16-under par. Bogeys on Nos. 14 and 16 doomed Mickelson, however, and he was unable to keep his charge going. Taylor was able to bounce back from a 4-over start to his back nine to birdie Nos. 15 and 17 to open up space between himself and the chasers en route to a four-shot win.

“It’s disappointing certainly to have not won, but I got outplayed,” Mickelson said. “I mean, Nick played better than I did. He holed a couple of great shots. That eagle on 6, the putts he made on 4, 5 and 7 … he just really played some great golf.”

Although Mickelson wasn’t able to defend his title, he did leave Pebble Beach with some momentum heading into an important part of the early-season schedule, and he left fans with more than a few highlights by which to remember his week.