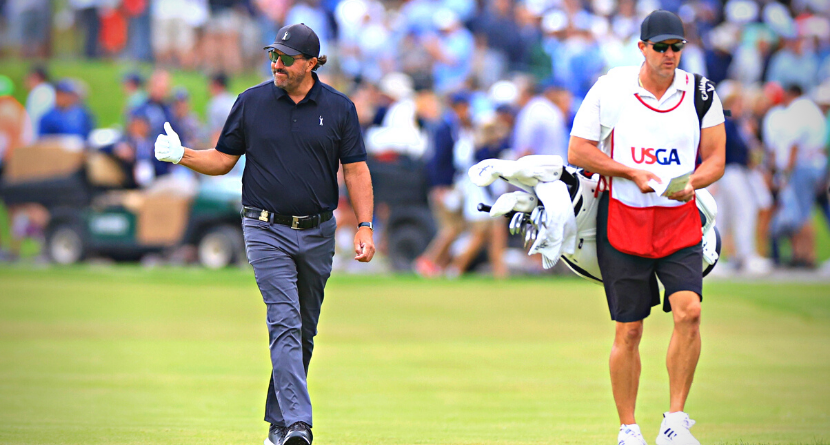 The thumb was out. The Boston galleries were favorable. Yes, it felt like business as usual for Phil Mickelson — he just couldn’t get his game to cooperate.

Playing in perhaps his most anticipated opening round at a major since he came to Winged Foot in 2006 with a chance to hold three titles at once, the 52-year-old showed the signs of a long layoff, struggling to an 8-over-par 78 that left him 12 shots back of leader Adam Hadwin.

“I really enjoyed the test; I think it’s just a spectacular golf course,” Mickelson said. “I just really struggled with the putter the first few holes, just like I did last week.”

The low point came early. The on-course face of LIV Golf was staring down a makeable birdie at the par-3 sixth, but he proceeded to four-putt for a double-bogey. His par effort, from about three feet away, was yanked so badly it didn’t sniff the cup.

Mickelson, who at age 50 became the oldest winner of a men’s major in May 2021 when he won the PGA Championship at Kiawah Island Resort, was making his first start on American soil since January.

Thursday was a struggle for one of Lefty’s LIV co-conspirators, Louis Oosthuizen, who shot a 7-over 77. Bryson DeChambeau, who’s set to debut when an American course hosts the controversial circuit for the first time next month in Portland, Ore., carded a 1-over 71; Patrick Reed shot an even-par 70; and Dustin Johnson, who won the 2016 U.S. Open at Oakmont, is in the best position of all the PGA Tour turncoats after turning in a 2-under 68.