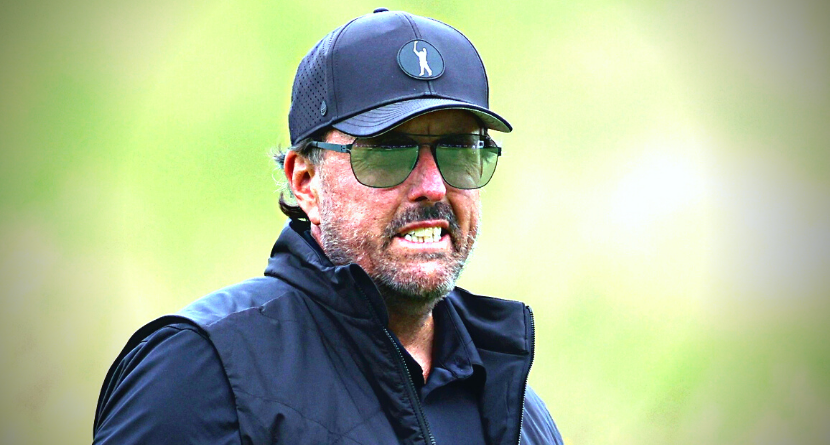 In the middle of a tense, at times excruciatingly awkward press conference Monday afternoon, Phil Mickelson seemed to be struck with a bolt of truth lightning.

Asked directly to extol the virtues of the LIV Golf Series, the six-time major champion began his response, “I think that there is an obvious, incredible financial commitment.”

Indeed, the money pouring into the rebel golf league backed by Saudi Arabia’s Public Investment Fund has eased the burden on defectors whose legacies were instantly tarnished when they deigned to align with such a corrupt entity.

But none have been so thoroughly peppered by the American press as Mickelson, the circuit’s supposed $200 million man, who this week will be making another go at completing the career grand slam when the U.S. Open kicks off from an iconic, history-steeped venue — The Country Club in Brookline, Mass.

Appearing on the traditional pre-tournament dais for the first time since he shrunk from public view in February, Mickelson — who turns 52 on Thursday — swatted away most questions in a 25-minute cringe-fest, falling back on vague and obviously rehearsed language about self-improvement. He grew irritable when reporters slipped multiple inquiries into the same question. He was defensive. He was evasive. And he didn’t have a particularly compelling response to his perceived complicity in what is quite transparently a “sportswashing” endeavor.

It was unsettling to see Mickelson, who used to command these scrums with an easy charm, look so unmoored. But his villainous turn is simply undeniable — even for him.

“I know that many of you have strong — well, many people have strong opinions, emotions about my choice to go forward with LIV Golf,” Mickelson acknowledged. “I understand, and I respect that. I’m incredibly grateful for the PGA Tour and the many opportunities it has provided me through the years, but I am excited about this new opportunity as well.”

In one of the press conference’s tensest moments, Mickelson was asked about a letter he received from a group of 9/11 families condemning his decision to accept money from the country that produced most of the terrorists responsible for the attack. His response lacked the conviction of a controversial statement he gave his biographer, Alan Shipnuck, back in February, when he referred to the Saudis as “scary motherf——” with whom he was prepared to enter into an uneasy alliance.

Notably, there were scant few questions about his golf or his pursuit of one of the sport’s rarest achievements. Mickelson and the U.S. Open share a tortured (yet wholly entertaining) union, each of his six runner-up finishes in the event exacting a more emotional toll than the last.

Boston, with its passionate sports fans, is normally a place where Lefty’s exploits receive raucous approval. But this week could assume a different tenor.

“In regards to if fans would leave or whatnot, I respect and I understand their opinions, and I understand that they have strong feelings and strong emotions regarding this choice,” Mickelson said, referring to those fans who may be inclined to drop their support. “And I certainly respect them, and I respect that. I think the Boston crowds are some of the best in sports, and I think that they have given me a lot of support. I’m very appreciative of that over the years. And I think that their excitement and energy is what creates such a great atmosphere. So whether it’s positive or negative towards me directly, I think it’s going to provide an incredible atmosphere to hold this championship. I think it’s gonna be a great event, and the people here have a lot to do with that.”

When the topic shifted to Tour-specific matters, including his relationship with commissioner Jay Monahan, Mickelson demurred. But in one of the session’s most interesting revelations, he said he wanted “to be able to choose which path I’d like. One or the other or both.”

“I’m very appreciative of the many memories, opportunities, experiences, friendships and relationships the PGA Tour has provided and those are going to last a lifetime,” Mickelson said. “But I’m hopeful that I’ll have a chance to create more.”