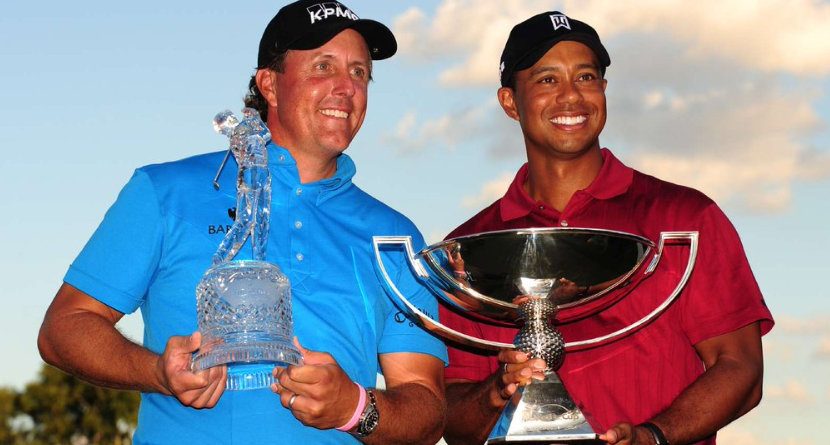 Phil Mickelson is optimistic about almost everything, so it should be no surprise he’s excited for Tiger Woods’ potential return to golf. Whether you want to consider them rivals or not over the past two decades, this is a simple case of greatness recognizing greatness.

For those of you who live under a rock, Tiger announced his “hopeful” return to competitive golf earlier this week. His first stop will be the Safeway Open which will be contested at Silverado Resort and Spa in Napa, California October 13-16. Mickelson has already committed to playing the event, as well.

Of course, Phil wasn’t aware of Woods’ announcement until he was informed during the BMW Championship pro-am on Wednesday, but that didn’t stop him from giving his glass-half-full thoughts.

“I think it’s great; I don’t know the state of his health. I haven’t seen him,” Mickelson said, according to Bob Harig at ESPN. “I’m looking forward to spending time with him at the Ryder Cup. I think that’ll be great motivation for him. Plus, he’ll have a week off.”

He continued, “I’m hoping we can get paired together [at the Safeway Open.] That would be really fun. I would love it. It’s great to have him back, and hopefully he’s physically able to practice the way he needs.”

Phil also kept it very real. He even went as far as saying that Tiger is the greatest of all time [insert thumbs up emoji].

“We’re always going to have high expectations because the guy is arguably one of the two greatest players in history, if not the greatest. Our expectations of him will always be high. It doesn’t mean given all the health issues and challenges that he’s faced … it doesn’t mean that’s fair.”

Can you wait until Phil pulls this shot off like he did yesterday and then winks at Tiger and says “bet you can’t do better than that?”

Obstacles. Now they’ve thought of everything.

Phil Mickelson still has the answer.https://t.co/rZbuVN4Y7B