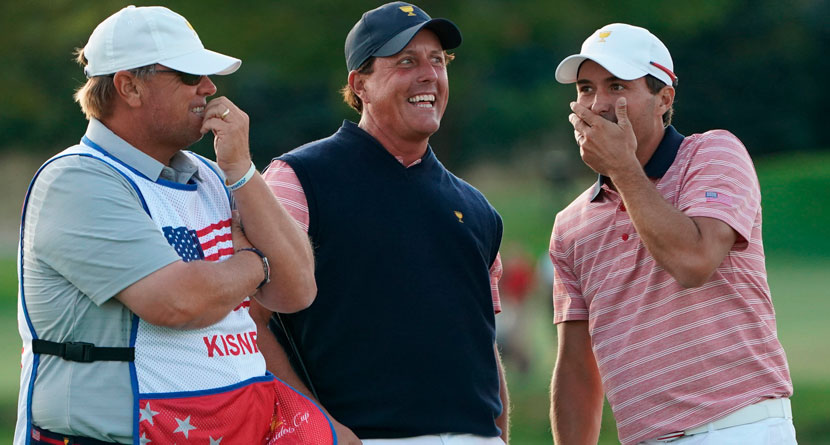 Phil Mickelson declared in the run-up to last week’s U.S. Open that his legacy and place within the game is set, and the only way for him to alter it would be to win his national championship.

While Mickelson’s bid for the career grand slam came up short last week, he may have sold himself short in the legacy department as he has become one of golf’s must-follows on social media. And on Tuesday, he added a new wrinkle to his robust social skillset with his “Phireside With Phil” debut.

“I’ll be sharing some interesting stories that have taken place through the years and will hopefully have some guests in the future too,” Mickelson posted across his social media channels as he sat wearing a blazer and sitting in front a candle.

Mickelson got into the meat of the story right away, explaining what happened when he noticed something out of wack happening before a restart caused a weather delay at the 2006 Memorial Tournament.

First edition of “Phireside with Phil.”

I’ll be sharing some interesting stories that have taken place through the years and will hopefully have some guests in the future too. #PhiresidewithPhil pic.twitter.com/4NDVTPNKmt

“My first story took play at the Memorial Tournament, back in 2006 or so,” Mickelson began. “Our second round was interrupted by weather and darkness and we had to reconvene the next morning at around 7 in the morning. I’m on the 6th hole and the Tour official is cutting a new hole, but we haven’t finished our round yet, we have to play to the same hole location, so I raise my hand and I say ‘Hey! We’re not done!’

“And the rules official raises his hand acknowledges that he heard me, but continues to cut a new hole. So I continue to walk further up and say, ‘Hey! We’re not done!’

“And again he puts his hand up to acknowledge he hears me, but continues to cut a new hole. So finally I walk right up close to the edge of the green, just on the other side of the lake, and I say, ‘We’re not done!’

“He stands up in disgust and puts his hands on his hips and says, ‘Someone took a dump in the cup.’

The Phireside with Phil series will undoubtedly be a hit.