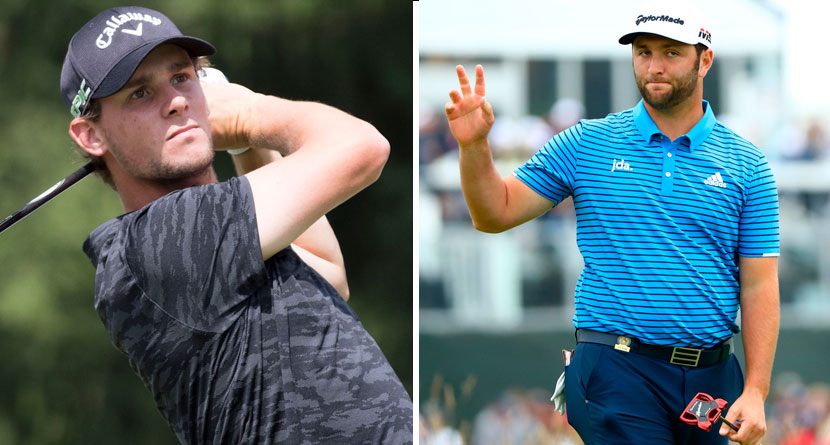 Life comes at you fast sometimes.

For Jon Rahm, one day you’re firing a final round 8-under par 62 to win your second Irish Open title and eighth professional victory at age 24, and the next you’re the butt of a bunch of jokes for an outfit you were caught wearing to Wimbledon.


With the Open Championship next week, and the aforementioned Irish Open and Scottish Open leading into the final major of the year, the world’s best golfers are within a short private jet ride of professional tennis’ version of The Masters.

As a result, it’s never a surprise to see some of golf’s biggest names sitting in the Royal Box on Centre Court at the All England Club. While the likes of Justin Rose, Francesco Molinari, Sergio Garcia, Lee Westwood, Danny Willett and Thorbjorn Olesen took in the action on Monday, July 8th, Rahm wasn’t on site until Wednesday where he was shown on the telecast during the Roger Federer-Kei Nishikori match.

As soon as Rahm was shown, the tweets started to flood in poking fun at his star-studded outfit. Leading the charge was European Ryder Cup teammate Thomas Pieters.

“I’m on the floor,” Pieters tweeted with a laughing emoji. Tagging Eddie Pepperell, the European Tour’s resident class clown, Pieters emplored the Englishman to “take it from here,” before tagging his clothing sponsors and requesting help for Rahm’s look.

While Pepperell, who’s in the field in this week’s Scottish Open, has yet to respond as of this writing, there were plenty more who were willing to weigh in on Rahm’s fashion sense.

Swear I’ve seen this look somewhere before. Jon Rahm out here at Wimbledon looking like Rocky during Apollo’s funeral pic.twitter.com/Kv1IyFnxnP

Jon Rahm wearing this outfit to Wimbledon is laugh out loud funny. pic.twitter.com/xqAERdY40Q

Golfers, by and large, aren’t known for their keen fashion sense, and it appears Rahm confirmed that line of thinking on Wednesday.