Play Suspended In First Round At Wentworth After Queen’s Death 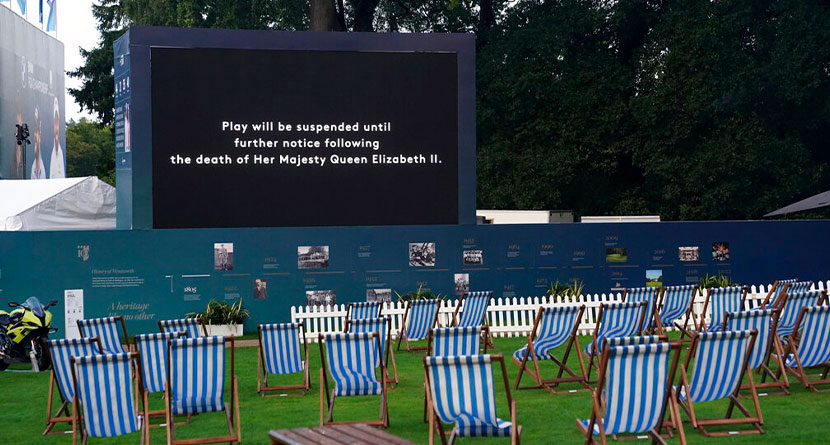 VIRGINIA WATER, England (AP) — Play was suspended late in the first round of the BMW PGA Championship on the European tour on Thursday following the announcement of the death of Queen Elizabeth II at the age of 96.

Thirty of the 144 players in the field had yet to finish their first rounds at Wentworth.

The tour said there would be no play on Friday and flags at the club were lowered to half-mast “out of respect for Her Majesty and the Royal Family.”

“Further updates on the resumption of play will be provided in due course,” the tour said.

Tommy Fleetwood, Andy Sullivan and Viktor Hovland shared the clubhouse lead after shooting 8-under 64s. English golfer Matthew Jordan was a shot further back after a round of 65.

Fleetwood, playing his first event since the British Open in July, birdied six of his final seven holes — the highlight being a 26-foot putt at No. 16.

He later wrote a tribute to the queen on Twitter, saying: “Rest in Peace Your Majesty, you will be forever in our hearts. God save The King.”

Hovland also had a strong finish, going birdie-birdie-eagle from No. 16.

Sullivan, who recovered from an opening bogey, would have taken the outright lead if he had made a birdie putt from 6 feet at the 18th but he missed.

Tensions between LIV golfers and those players who have shunned the Saudi-backed breakaway series dominated the build-up to the tour’s flagship event held at its headquarters outside London.

Abraham Ancer, a LIV golfer whose presence at Wentworth was questioned by defending champion Billy Horschel and Jon Rahm, shot 4 under and was in a tie for 11th place along with Horschel and Rory McIlroy.