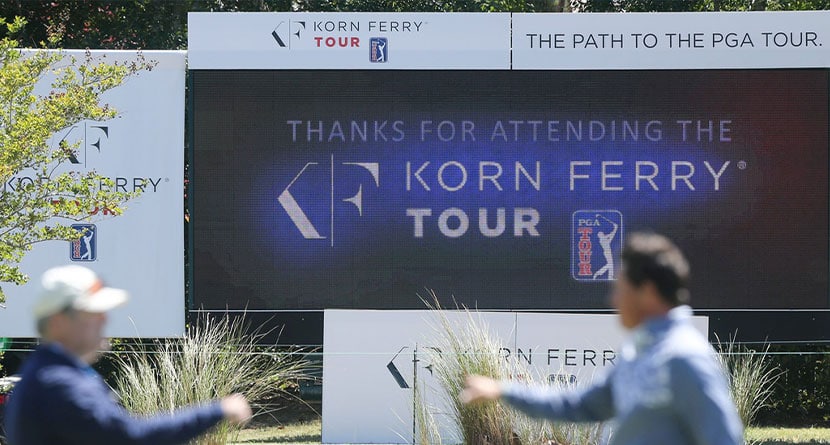 Monday Qualifiers on the PGA and Korn Ferry Tours are understandably and routinely high-drama events as dozens of pro golfers vie for a ticket into the field of the coming week’s tournament.

Naturally, with so much on the line, emotions and tempers tend to run high as folks’ livelihoods are often on the line, but what took place on June 14 at Sand Creek Station Golf Club in Newton, Kansas at the Korn Ferry Tour’s Wichita Open was something that hasn’t been seen before.

The Fire Pit Collective’s Ryan French, the golf world’s most popular connection to Monday Qualifiers, has regaled audiences with tales of close calls and breakthroughs for years, but on this particular Monday, he was the conduit for a story that seems almost too crazy to believe.

🚨🚨 There has been an arrest made of a player at the KFT Monday.

Details to follow but a player has punched another player and has been arrested.

As French reported, pros Austen Dailey and Derek Fribbs were paired with amateur Luke Smith, a member of the University of Tennessee-Martin who had his father, Oliver, on the bag.

For the uninitiated in the wild world of Monday Q’s, playing well is rarely good enough to earn one of the elusive spots; a player needs to go low. So when all three members of the 8:10 a.m. tee time got off to a sluggish start, not only did their hopes of advancing through wane, they began to slow down the pace of play.

In an effort to speed up play, common courtesy dictates that each member of the group would look for wayward shots, but that wasn’t the case on Monday and things came to a head on the par-3 7th hole at Sand Creek Station.

According to Fribbs, Dailey hit his tee shot left of the green. While Fribbs assisted Dailey in the search for his ball, neither Smith bothered to assist in the search. After the completion of the hole, Dailey allegedly said something to the Smiths with the main thesis being: helping others look for their ball may help speed up play.

Full story from a source:

And it was on. (Quotes not exact)

“This was apparently a bridge too far for the Smiths,” French wrote. “According to Fribbs, Luke and Oliver Smith started yelling at Dailey about his quality of play and how it was affecting the group. Oliver went on to make it clear that his son, Luke, ‘wasn’t here to look for balls.’

“Dailey then turned his back and walked away towards the eighth tee. Little did he know that in a matter of seconds all hell would break loose. It was at this point that Luke Smith allegedly jumped on Dailey and started to throw punches.”

Fribbs, who had gone to the 8th tee box after holing out, saw the fight break out between 7 green and 8 tee and rushed to break it up, but was rebuffed by Smith’s father/caddie, Oliver, who “allegedly waved a putter at Fribbs and anyone else with an eye on jumping into the fracas.”

The elder Smith’s putter-waving was later confirmed by another PGA Section official on-site, according to French.

The details from the fight heard around the Monday Q world.https://t.co/WYBFY2rTaT

The group behind Dailey, Fribbs and Smith called the pro shop and when officials came to break up the fight, Dailey was asked whether or not he’d like to press charges.

“Absolutely,” Dailey said, “I was assaulted.”

Both Dailey and the Smiths were taken back to the clubhouse by the staff and Luke Smith was placed under arrest. He was subsequently bailed out shortly thereafter.

Fribbs continued to play on alongside a PGA Section marker, but failed to advance. On his 10th hole, a police officer joined Fribbs’ pairing and took his statement as he walked down the fairway. At the conclusion of play, Fribbs had his entry fee reimbursed.

“It was crazy,” Fribbs concluded. “I can’t believe it happened.”