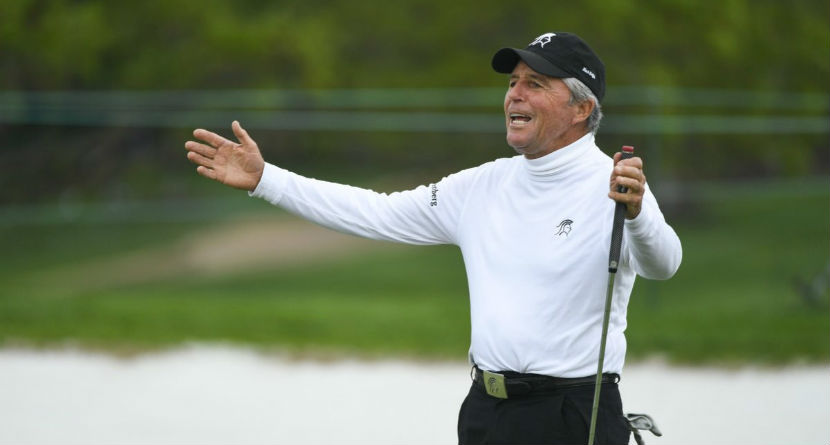 With the U.S. Open only a week away, a two-year rivalry was unexpectedly renewed between nine-time major winner Gary Player and world renowned course designer Robert Trent Jones Jr. The feud dates back to the 2015 U.S. Open at Chambers Bay when the Black Knight was highly critical about the highly criticized Jones Jr. design.

“This has been the most unpleasant golf tournament I’ve seen in my life,” Player said live on Golf Channel during Saturday morning of the tournament. “I mean, the man who designed this golf course had to have had one leg shorter than the other. It’s hard to believe you see a man miss the green by one yard and the ball ends up 50 yards down in the rough.”

Even after what Jones Jr. described as an apology that was exchanged between the in a recent interview with Golf Word’s John Strege, that, and the following comment did not sit well with Player.

“Gary Player wasn’t playing in the tournament,” Jones Jr said. “I think Player, as we all know him, is kind of a showboater. For whatever reason he chose to make those comments.”

In fact, the whole thing didn’t sit well with the 81-year-old professional golfer turned fitness guru. So much so, a 600+ word response entitled “Robert Trent Jones Jr. Continues to Disrespect the USGA, Golf & Gary Player” was posted on Mr. Player’s website on Tuesday which you can read here:

“Jones Jr showed he clearly cannot accept any criticism and remains overly defensive about his design work,” part of the statement read. “Nearly two years later, Jones Jr proceeded to call Player a “showboater” for his comments and even questioned Player’s attendance at the championship and the Olympic Games.

“Jones attended both events as a fan while Player was there as a past champion and at the Olympics as the captain of the South African team. For Jones to question why Player was there at all shows disrespect for everything that golf’s global ambassador has done for the golf industry worldwide for seven decades.

“And who better to speak for all golfers than a grand slam champion and designer of 400 golf courses around the world?

“If you have ever spoken to Gary Player directly, you know he never is wary of broaching any subject. Jones Jr claimed Player avoided him at the Senior British Open and later apologized for his comments while both were at the Olympics. This is simply not true.”