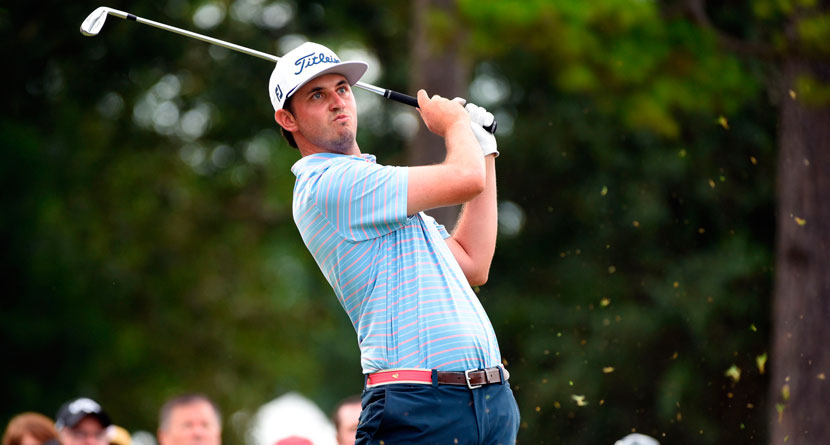 J.T. Poston did something this week that hasn’t been done on the PGA Tour since Lee Trevino in 1974: he played 72 bogey-free holes en route to a victory at the Wyndham Championship.

Poston needed every one of his 20 birdies and one eagle at Sedgefield Country Club as he nipped runner-up Webb Simpson by one shot.

“I probably haven’t had that many bogey-free rounds this season, this year, much less back-to-back,” Poston said. “To be able to do four in a row is pretty special, and to be able to finish it off with a 62 Sunday is pretty awesome.”

Poston came out firing on Sunday three shots behind 54-hole leader Byeong-hun An. He birdied the second hole and then eagled the par-5 fifth before tacking on two more birdies on Nos. 7 and 8. Knowing he needed to make a few more, Poston sprinkled in three more birdies on the back nine to post his 22-under and then he waited.

Like Poston, An was having a special week as well, not making a bogey in his first 68 holes of the event, but two dropped shots over the final four holes was enough to drop the South Korean into solo third place. Simpson surged up the leaderboard and into solo second place thanks to four birdies in his final five holes.

For Poston, the victory comes with all the bells and whistles — a million-dollar paycheck, a two-year exemption on the PGA Tour and a first-ever start in the Masters next April.

“That’s unbelievable. I mean, the exemption, obviously job security’s a good thing, but Augusta, that’s another thing,” Poston said. “That’s something I’ve always dreamt of, playing in that tournament. To know I’m in that field in April, that will be an awesome week. It will be a week I’ll never forget, no matter what happens.”

Poston still has work to be done before he turns his sights to Augusta, Georgia. In fact, his next goal is to play up the road in Atlanta in three weeks’ time at the Tour Championship. His win moved him to 27th place in the FedEx Cup standings as the Playoffs get underway this coming week at The Northern Trust.