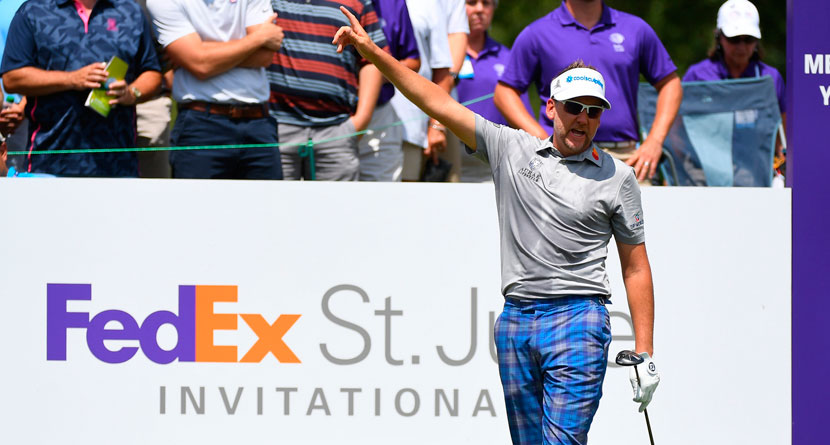 Ian Poulter sits at 5-under par through two rounds at the WGC-FedEx St. Jude Invitational to sit in a tie for seventh place heading into the weekend, but his good play is being overshadowed by an unfortunate incident with a fan.

Playing his final hole of his first round on Thursday, Poulter told Sky Sports in an interview that a fan yelled “Get in the bunker!” after he hit his approach into the 18th green at TPC Southwind.

“Really, you deserve to be here, do you?” Poulter shouted back at the fan before motioning to security to remove the offender from the grounds.

“It is a shame, I hope we can control it more going forward and it gets stamped out, because it is not needed in the game of golf,” Poulter said, according to GolfDigest.com.  “It is disappointing, to be honest. I get it, I’m an Englishman, I play on the Ryder Cup team, I’m sure I’ve upset a few of these guys from time to time when they’re watching TV. But when we’re playing a world-class event like we do week in, week out, and you’ve got guys like that, in a small group and want to feel big in front of their friends and they scream silly things out, it is disappointing.

“I hate to do that (kick someone out), but we shouldn’t be getting abused in this day and age. Unfortunately, it happens quite often. Most of the time we just ignore it and let it go.”

“I hate to do that, but we shouldn’t be getting abused in this day and age. Unfortunately it happens quite often, most of the time we just ignore it and let it go.”

Ian Poulter had a fan ejected at the WGC-FedEx St. Jude: https://t.co/jzCKBCgMtM pic.twitter.com/lZuXtZFUkm

Poulter would go on to par the par-4 18th hole and post a first round score of 4-under par 66 in the Tour event-turned-World Golf Championship.

“We have got a WGC tournament,” Poulter said in the interview, “It has got everything that we want to come and compete apart from one idiot who decides to be silly.”

Poulter is four back of 36-hole leader Matthew Fitzpatrick heading into the weekend. First-round leader Jon Rahm is at 7-under par along with Patrick Cantlay, Cameron Smith and Billy Horschel.

Shugo Imahira is alone in sixth place, and Poulter is joined by Alex Noren, Webb Simpson, Brooks Koepka, Justin Rose and Bubba Watson at 5-under par.