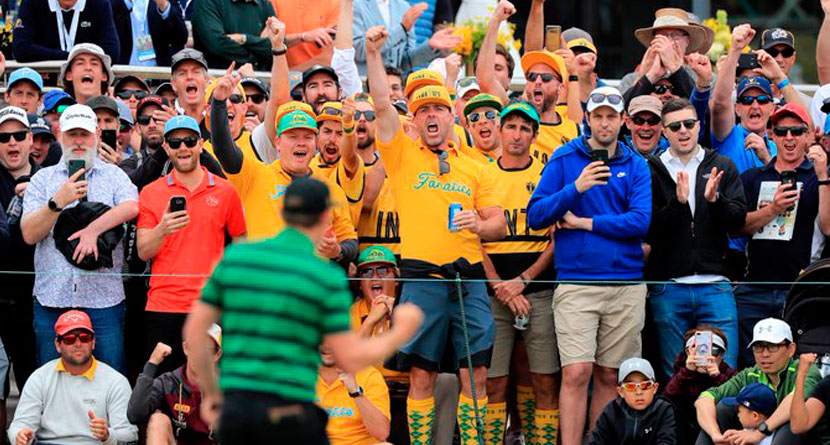 One of the more vocal and recognizable portions of this year’s Presidents Cup — off-the-course division — was the coordinated and choreographed fan groups that populated the first tee and rope lines down the stretch of the matches.

Two groups of fans led the way — “The Fanatics,” who supported the International team, and  “We The People,” who supported the American side. The Fanatics have been mainstays at the last few Presidents Cups, a largely Australian contingent that appeared at past events at Liberty National in 2017, Jack Nicklaus Golf Club in Korea in 2015 and Muirfield Village in 2013.

We The People, however, were new to the matches this year, and something seemed off about them to other fans and media members on the ground, as Shane Ryan pointed out on Twitter. Turns out, the fans themselves are actually paying for the privilege of rooting on the Americans, as participants in an experience organized by a tour company called We the People,” Priest wrote. “The company was founded in 2017 by Australian sports fan, Gareth Fletcher, who has a background in sports tours and event management.

“According to the organization’s website, participants will receive a supporter’s hat and shirt, a tattoo and chant sheet and a ‘once in a lifetime experience in interacting, cheering for & motivating Team USA’s best golfers.'”

The PGA Tour, who runs the Presidents Cup, bristled at the implication that they had paid for American fans to be present at the event.

“To say that we paid people to dress up as or pretend to be American is simply ill-informed,” Presidents Cup tournament director Matt Kamienski told Priest in a statement. “We develop marketing relationships with partners and groups that can help us reach and entertain new fans. We have done so with the Fanatics and We the People for many years and believe these partnerships, along with all of the other relationships both traditional and unconventional, are key factors in generating attendance, interest and engagement in this year’s Presidents Cup, both in advance and during the event. The fact that we are seeing tremendous on-site attendance, ticket sales and engagement speaks to the success of this aspect of our broader approach.”

“I’m not sure what all the negativity was about online,” Fletcher said. “We just want to come out to sporting events and cheer on the athletes. The Presidents Cup is a big event with players and fans from all around the world.

“The Internationals aren’t an Australian-only team, so cheering for them you’re also cheering for other countries, which we enjoy. The Presidents Cup unites people of all nationalities and we don’t see anything wrong with it.”

Right or wrong, for-hire or of their own volition, the We The People group had the last laugh when the Americans raised the Presidents Cup for the second time at Royal Melbourne, even if half of those supporters were Aussies.