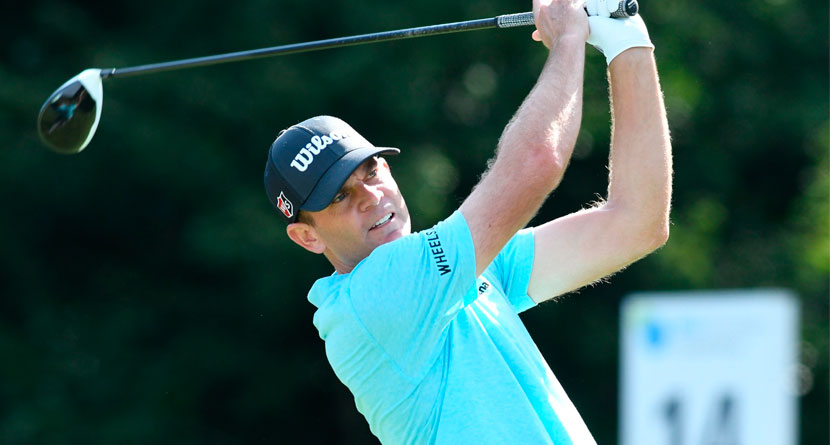 The three-time Tour winner entered this week’s Wyndham Championship 169th in the season-long FedEx Cup standings and needing a solo third-place finish to get himself into next week’s Northern Trust, the first leg of the Playoffs.


An opening-round of even-par 70 made Steele’s task even taller, and perhaps that was the reason he took a risk on his fourth hole of the second round on Friday. After playing his first three holes in 4-over par, Steele was upset with his alignment — or lack thereof.

Despite hitting a solid approach into the 13th hole about 20 feet from the hole, Steele asked his caddie to take a look at where he was aimed. Steele’s caddie pulled an alignment rod out of the bag and laid it on the ground to show his boss his aiming point, which is a breach under Rule 4-3.

“I thought maybe that would be a problem,” Steele told GolfChannel.com’s Will Gray. “(The rules official) said that an umbrella and a club was fine to use, but a stick’s not. It’s one of those things.”

Steele was told to add two strokes to his score, turning his par into a double bogey. He would go on to bogey his next hole, taking him to 7-over par through five holes. To his credit, Steele played the final 13 holes in 2-under par, but by that point it was too little, too late.

The California native missed the cut, but by virtue of his win at the beginning of last year at the Safeway Classic, he still will have full status on the PGA Tour next season.

Byeong-hun An held onto his one-stroke advantage by shooting a third-round 4-under par 66 to hold the 54-hole lead over a charging Webb Simpson. The 2011 Wyndham champion shot a third-round 5-under par 65 to leapfrog Brice Garnett for second place.

Viktor Hovland, the reigning U.S. Amateur champion and former Oklahoma State Cowboy, shot the round of the day, a 6-under par 64 to move into fifth place. Hovland needs a win to earn himself entry into the FedEx Cup Playoffs, but another solid day will go a long way towards securing his PGA Tour card in 2020.