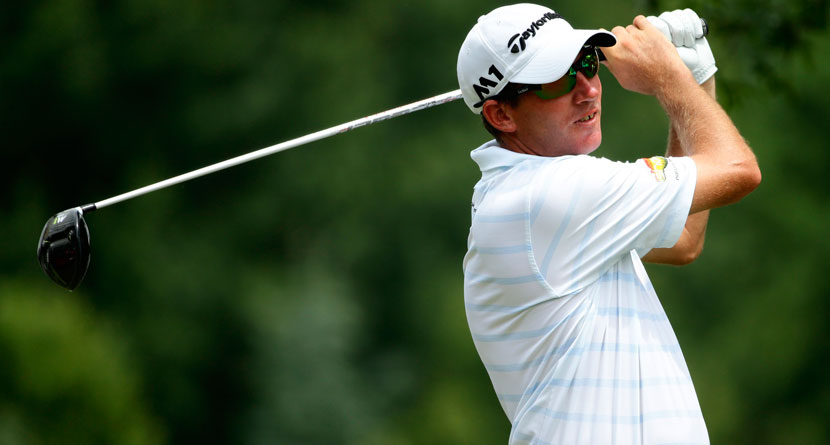 PGA Tour pro Jim Herman isn’t in Northern Ireland this week competing for the Claret Jug, but for the Cincinnati, Ohio native, he’s doing the next best thing: leading the opposite field event down the road from his hometown at the Barbasol Championship outside of Lexington, Kentucky.

Herman, who has shot rounds of 65-65-62 to lead Kelly Kraft by a stroke through three rounds gave credit to the President of the United States for his recent turnaround on the greens.

Herman, a former assistant professional at Trump National Bedminster in New Jersey, was encouraged by President Donald Trump years ago to stop folding sweaters in the pro shop and pursue a playing career. A Shell Houston Open victory and nearly $6 million in career earnings later, Trump had some more advice for Herman ahead of the Barbasol Championship.

“He gave me a good talking to and told me to use a different style (of putting) if it’s not working,” Herman said on Friday. “Some great advice, so I appreciate it.”

During an in-round interview on Saturday, Herman elaborated.

“The President of the United States called me, wished me good luck today and congratulated me on a couple good rounds the first few days here,” Herman said. “Pretty interesting getting a call from the President.”

Herman explained that he hadn’t been hitting his start lines and therefore not making many putts. Trump told him to switch it up, and Herman obliged, even trying out Trump’s putter for the last few holes.

Herman leads the field in strokes gained: putting at 9.976 and is second in greens in regulation, a good recipe for low scores.

Austin Cook and Bill Haas are four shots back of Herman entering Sunday’s final round.