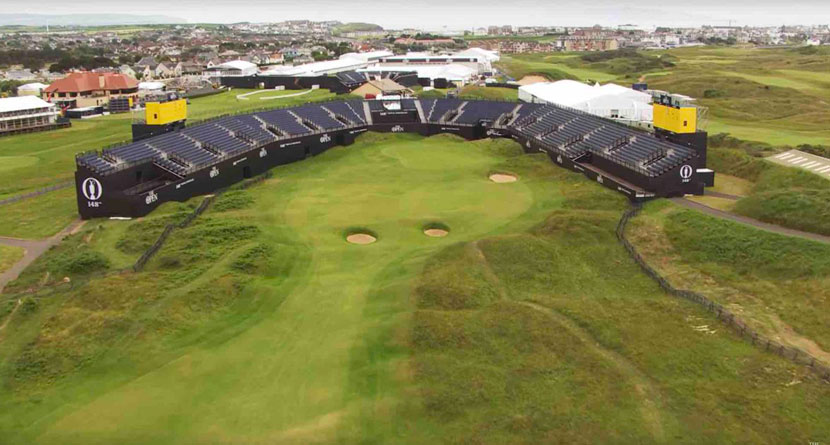 The Open Championship has a lot of perks and traditions to it, but perhaps one of the coolest things about the world’s oldest major championship is that any diehard golfer with the necessary means and paperwork can travel to the British Isles and play the courses that the pros do.

This week’s Open venue, Royal Portrush in Northern Ireland, is no different.

What is different when average hackers get the chance to play major — or even Tour — courses is that the infrastructure is often missing, such as grandstands and hospitality suites that are often lining holes.

While there are obvious reasons for not keeping the giant temporary obstructions in place, many a golfer has bemoaned the advantage that they could have used had they still been in place. Yet, this week at the Open, the R&A is not allowing the “grandstopping” or “grandstanding” — depending on your preferred nomenclature to be taken advantage of.

The R&A has a simple solution to prevent it at Royal Portrush: https://t.co/ujDKbAH88u pic.twitter.com/M0BbpHV1Ax

The famed grandstands that surround the 18th green at Royal Portrush can still be used as a backstop of sorts for the pros, but they won’t be getting a simple free drop as a result.

Scattered around the edge of the green are various drop zones that are situated in some of the gnarliest rough the Northern Irish links has to offer.

While the practice isn’t often seen, when the option is in play, we’ve seen pros both attempt and pull off the feat in recent months. Typically used when there’s some kind of hazard or obstacle fronting a green, both Scott Hend and Cameron Champ attempted to use the grandstands behind a green as a backstop.

One of them pulled it off…

He meant that! Off the backboard.

…and the other didn’t.

If a player is considering using the backstop at Royal Portrush this week, they’ll have to weigh their drop zone options, which are less than ideal.