R&A Wants You To Stop Calling It the British Open 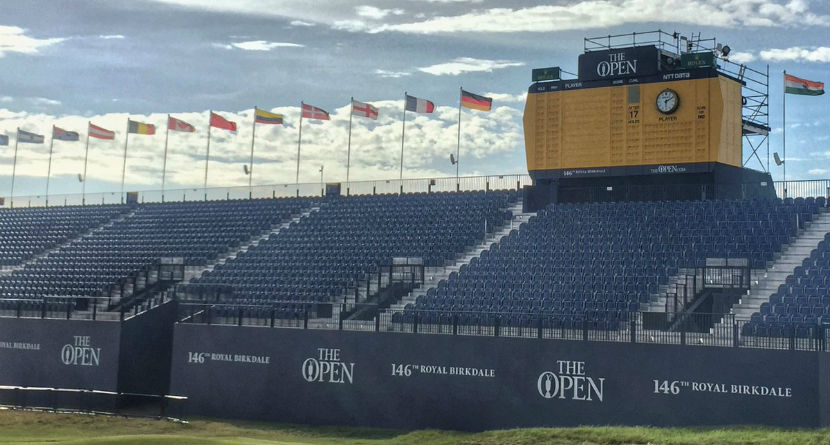 If you’re still calling the Open Championship, the British Open, you’re doing it wrong. As final preparations are being made for the 146th playing of golf’s oldest major which tees off on Thursday at Royal Birkdale, the R&A, who runs the prestigious event, is taking measures to make sure it gets called by its proper name once and for all.

The Wall Street Journal’s Brian Costa has the full story:

It’s true that their [The R&A’s] tournament, set to begin on Thursday, is open to any golfer that qualifies. And it is indeed held in Britain. Royal Birkdale, in the seaside town of Southport, England, is this year’s host. But they are adamantly opposed to the use of the term British Open, and have launched a serious campaign to eradicate it from the American sports lexicon.

Their tournament is the Open Championship, they say, or simply the Open. The R&A, the governing body that oversees the event, views the two names as interchangeable. The only improper name for it is the one most Americans use for it.

To win the broadcast rights beginning in 2016, NBC Sports had to agree as part of the contract that it would refer to the tournament strictly as the Open or the Open Championship. NBC, in turn, has instructed announcers not to use the phrase “British Open” on the air.

But Johnny Miller, the longtime NBC analyst and 1976 Open champion, has had to correct himself repeatedly. “I have trouble with it,” he said.

Getting other networks to follow suit has been even more difficult. Moments before play-by-play voice Dan Hicks made a recent promotional appearance on CNBC, an NBC Sports publicist reminded the anchors of the tournament’s proper name.

When the cameras went on, Hicks said, “First thing out of their mouth: ‘The British Open is coming our way!’ ” The publicist sighed, “Oh, the R&A is not going to be happy about this.”

Alastair Johnston, the longtime IMG executive who has represented the R&A in media rights, licensing and sponsorships since the 1990s, said the B word has complicated some licensing negotiations in Asia.

“Business partners in Japan are saying, ‘Please call it the British Open because it will mean more to people here,’ ” Johnston said. “We’re not able to give them the name that they want.”

American Stewart Cink, the 2009 Open champion, said that whenever he is in Britain, he refers to it strictly as the Open. But if he is talking to someone in the U.S., he calls it the British Open.

“The whole idea when you’re talking is for communication,” Cink said. “People in America don’t know what the Open is.”