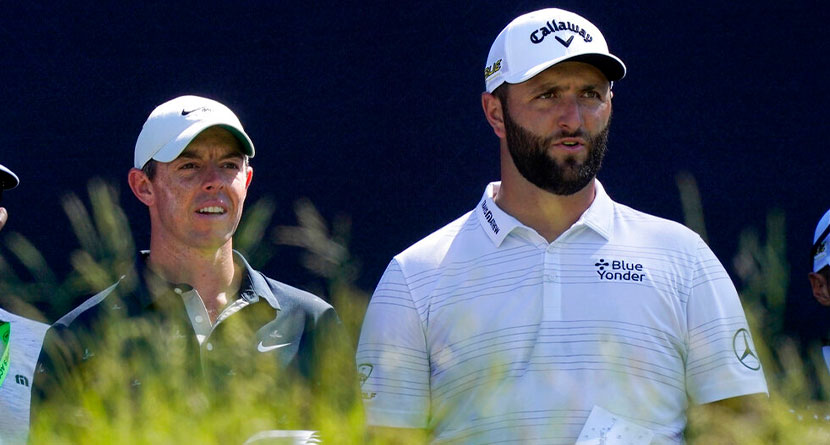 Two of golf’s biggest superstars have weighed in on the debate over the Official World Golf Rankings points being awarded at this weekend’s PGA Tour and DP World Tour events, and they find themselves with vastly differing opinions.

Speaking to the press ahead of the DP World Tour Championship in Dubai, Jon Rahm and Rory McIlroy were asked about the disparity of OWGR points going to this weekend’s winners.

“I’m going to be as blunt as I can. I think the OWGR right now is laughable. Laughable,” said Rahm. “The fact that the (PGA Tour’s RSM Classic) doesn’t have any of the top 20 in the world and has more points than this event where we have seven of the top 20 is laughable.”

Rahm was referring to the 38.38 OWGR points that will go to the winner of the RSM Classic on the PGA Tour. At the DP Tour World Championship – which, as he noted, has seven of the top 20 players in the world in the field – the winner only gets 21.82 OWGR points.

The reason for the discrepancy is the OWGR modifications that went into effect in August.

One of those modifications, as noted by Rory McIlroy, is the depth of field. The DP World Tour Championship is a limited-field event with only 50 players. The RSM Classic will host a full field of 144, which allows more players to contribute to the event’s strength of field as calculated by the OWGR.

“Yeah, so when you look at two different fields, you’ve got a 50-man field (in Dubai) versus a 144-man field (in Georgia),” said McIlroy. “So the reason that this has got 21 points and the RSM has got 39 is the person that wins the RSM has to beat 139 other guys. You only have to beat 49 other guys here. It’s a much fairer system.”

Rahm obviously does not agree with Rory’s assessment.

“I understand what they are trying to do with the depth of field, but having the best players in the world automatically makes the tournament better,” said the Spaniard. “But would you rather win a tournament when you have the No. 1 player in the world there or because you have the 30th or 6th there?

“I think it’s more valuable if you’re beating the best players in the world. I think a lot of people would agree and I think it should reflect that.”

Rahm said he believes the OWGR “missed the mark” when they made their changes.

“I think some aspects of it might be beneficial, but I think they have devalued the value of the better players. Take the Tour Championship as an example. The 30 best players of the year should not be punished because it’s a smaller field.”

Rory took more of a big-picture approach when discussing the changes, pointing out that things will change as more players get a full two years under their belts in the new system.

“I think it’ll take a while; it’ll take another 18 months for it all to play out,” McIlroy said. “As it’s being rolled out, there’s a little bit of discrepancy, but once we get two years into it and everyone’s played a full two years and they have whatever their minimum divisor is and all the events, I think you’ll see a fairer reflection of where everyone is ranked in the world.”

The boys at Data Golf also dove into the debate in a Twitter thread on Tuesday. They dug a little deeper into the reason for the discrepancy, which they cited as point distribution.

1/ The OWGR point allocations at the RSM and DPWT Champs illustrate why it’s hard to make a points-based system perfectly fair.

The winner of RSM gets 39 points, while the winner of DPWTC only gets 22. We have the RSM as only slightly harder to win, so this seems unfair.

The OWGR has been a hot topic for months now, but this feels like the first OWGR headline that hasn’t included any mention of LIV Golf and its players. As with most things in golf nowadays, LIV didn’t stay out the conversation for long after Rahm weighed in on the breakaway series’ quest for OWGR points.

“A lot of people are against them having World Ranking points,” he said. “I’m not necessarily against it but there should be adjustments. If your requirement is to have World Ranking points is 72 holes and a cut, maybe you don’t award them 100 percent of the points since they are not fulfilling all of the requirements. So they need to respect that as every other tour has.”

He also acknowledged that LIV has enough talent to warrant some sort of OWGR acknowledgment.

They do have some incredible players,” Rahm continued. “To say that Dustin wasn’t one of the best players this year would be a mistake. So I think they could be awarded. I just don’t know how we work it out.”

After the first round in Dubai, Rahm finds himself tied for 14th place at 2-under. McIlroy shot a 1-under 71 – his highest opening round score since this year’s Masters – and is in a share of 22nd place. Defending U.S. Open champion Matt Fitzpatrick and Tyrrell Hatton share the lead after a pair of 7-under 65s.