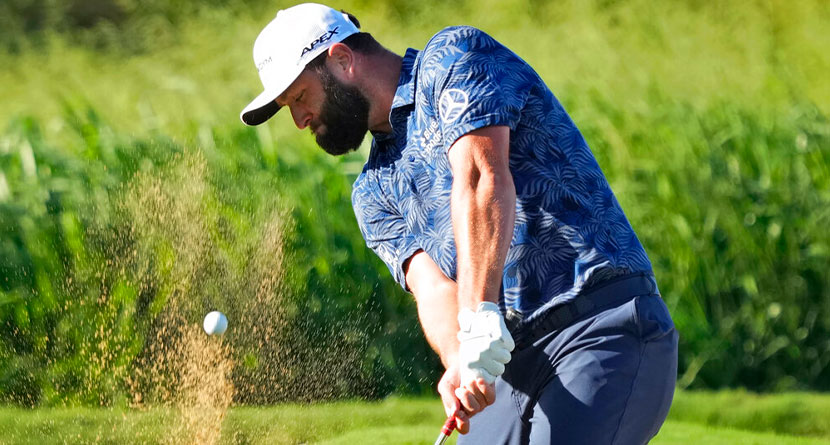 KAPALUA, Hawaii (AP) — Jon Rahm is starting to get used to low scoring on the Plantation Course at Kapalua. He can only hope this start leads to a better finish in the Sentry Tournament of Champions.

One year after he was 33-under par and still finished second, Rahm birdied three of his last four holes for a 9-under 64 and shared the lead Thursday with Colin Morikawa and J.J. Spaun in an idyllic start to the year.

Cameron Smith won last year at 34 under, a PGA Tour record to par, during a week of hardly any wind. Whether the week is set up for more scoring records depends on the trade win which, like most who come to Maui, was on vacation Thursday.

The previous low score by a player to hit 5 or fewer fairways in a round at Kapalua was 68.

As for whether Kapalua owes him one, Rahm wasn’t buying.

“I can’t make a case for that on a lot of golf courses,” Rahm said. “I can’t say much, man. I shot 33 under. I got beat by 34 under. That’s just what it is. We both played really good golf. It was a great battle. Hopefully, if we get to that point again, hopefully it’s me and hopefully I end up winning by one.”

The Plantation Course is in prime shape, fast without being firm because of severe slopes that can make shots roll longer on the ground than they fly in the air.

Morikawa is among 10 players who failed to win last year and still got into the Tournament of Champions. Under the bold new PGA Tour schedule of elevated tournaments — the purse this week is $15 million — the Kapalua field was expanded to include anyone who reached the Tour Championship.

The two-time major champion is determined to fix deficiencies that slowed him last year, hiring a putting coach Stephen Sweeney and turned to former player Parker McLachlin for help with his short game.

“I just have answers,” Morikawa said. “Before when I was putting it was like it was guess work. I might have putted well today and then thought I was doing something, but in reality it was something else.”

Whatever he had Thursday was working, and it helped to see a 20-foot putt drop early. And then he ran off those six straight birdies, only two of them outside 10 feet.

Tom Kim had two eagles, holing out from 116 yards on the downhill sixth hole and drilling a fairway metal to 5 feet on the par-5 15th. He was at 65, one shot behind.

Jordan Spieth was up to his high-wire act, missing a 2-foot par putt on one hole and holing a flop shot from the collar of a bunker just off the back of the 16th green to save par. He wound up with a 67.

Billy Horschel was the only player in the 39-man field who failed to break par with a 76.

Among those at 66 were Masters champion Scottie Scheffler, who can return to No. 1 in the world with a third-place finish, and Tom Hoge, who has a big travel schedule ahead.

Hoge played college golf at TCU. He earned his spot at Kapalua for the first time, and he’ll be on Oahu next week for the Sony Open, a trip that will be some 5,000 miles. Hoge said he’ll leave Maui on Sunday night for Los Angeles to watch the Horned Frogs play for the national championship against Georgia, and then head back to Honolulu.

Xander Schauffele, who won at Kapalua in 2019 and lost in a playoff the following year, scratched out a 70 while dealing with a back issue that first surfaced a month ago in the Hero World Challenge in the Bahamas. He’s not sure what’s wrong, only that he couldn’t swing very hard.

“I’m 29 and Hero was like the first like issue I’ve ever had, so this is new to me,” Schauffele said. “That’s why I don’t know how to answer these questions. I’ve never had to do this. Hopefully we don’t have these conversations more often.”