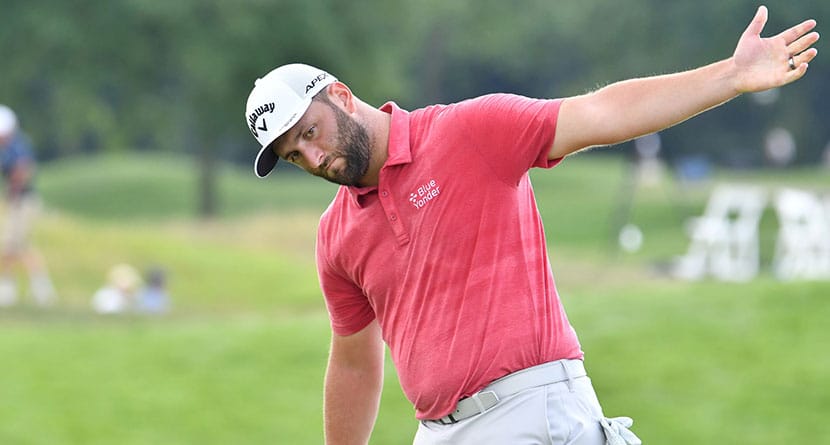 When you hear pro golfers talk about golf courses and tournaments, there is one word that organizers and the course setup teams want to hear: fair.

The tests of golf can be easy or difficult so long as they are fair. Once luck and chance comes into play, that’s where you start to lose the best players in the world, which is why comments made over the weekend from Jon Rahm should be setting off alarm bells at PGA Tour headquarters.

After firing a second-round 67 at Liberty National to take the 36-hole lead, Rahm was asked about his feelings about the Tour’s FedEx Cup Playoffs given his five years of experience with them. To Rahm’s credit, he didn’t sugarcoat it.

“I don’t like that at all. I think you have the Playoffs itself and win the first two, and if you don’t play good on the last one, you don’t — you can end up with a really bad finish.

I don’t like it. I understand the system, and the way I was told by one of the PGA Tour officials — I’m a Patriots fan — and the Patriots win everything and get to the Super Bowl and they don’t win the Super Bowl, you don’t win the Lombardi Trophy, right? My answer was, they still finished second.

“They have to understand golf is a little different.”

Jon Rahm made it clear he is not a fan of the FedEx Cup Playoffs format: https://t.co/onmSdMR6Za pic.twitter.com/C9DiRBZYWl

Rahm was then asked how he would fix the system, but he couldn’t verbalize a better way to handle all the demands that come with crowning a champion.

“At the end of the day, you could win 15 events, including both Playoffs events, and you have a two-shot lead (going into the Tour Championship),” he said. “I understand it’s for TV purposes and excitement and just making it more of a winner-take-all, and they give you a two-shot advantage, but over four days that can be gone in two holes.

“I don’t know what system is best. I do like going to East Lake with this new one in the sense of knowing where you stand and what you have to do. You know, the years prior, (there were) so many different combinations of what could happen. It was kind of hard to get your head focused on one thing.

“I don’t think it’s a fair system in that sense now, but it’s the one we have and it’s what we’ve got to deal with.”

Rahm finished in solo third at The Northern Trust after taking a lead to the back nine in the final round. He enters this week’s BMW Championship second in the FedEx Cup standings behind Tony Finau.