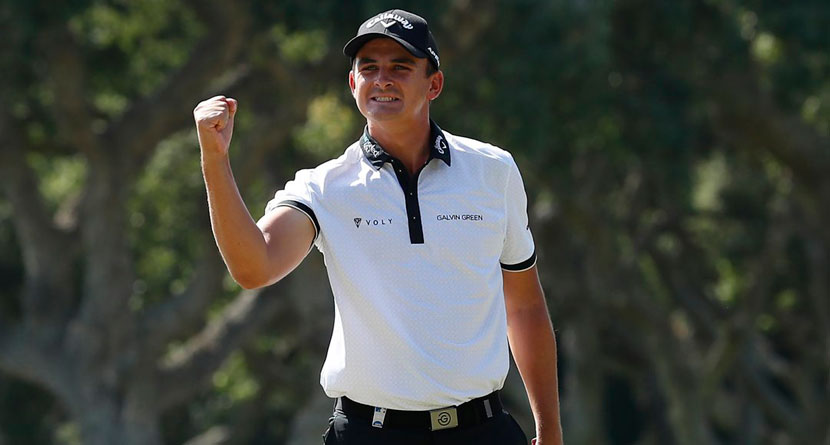 Bezuidenhout’s unlikely rise to European Tour winner began when he was just 2 years old and mistakenly took a drink out of a Coca-Cola bottle that had been repurposed to hold some rat poisoning.

In a blog post written on EuropeanTour.com, Bezuidenhout explained the bizarre incident.

“When I was a baby whilst playing with friends in the street I drank rat poison in a freak accident,” he wrote. “I was two and a half years old and I was playing outside when I picked up a random Coke bottle, I took a drink of it thinking it was indeed Coke, however it actually contained rat poison. It was a moment which would change my life forever.

“As a result of that moment of naivety, I almost died. The hospital had to pump my whole stomach to get rid of all the poison, but the poison affected the whole nervous system in my body, and one of the long term effects of this led to me having a stutter. That stutter would eventually lead me to develop a severe case of anxiety.”

Amazing backstory for Christiaan Bezuidenhout: Accidentally drank rat poison when he was 2. The poison affected his nervous system and led to a lifelong struggle with stuttering, anxiety and depression. Now he’s a Euro Tour winner.

His life in golf would eventually be impacted by the incident years later. At 14 years old, Bezuidenhout began taking beta blockers to reduce his blood pressure and help him with anxiety. After his first round of the 2014 British Amateur at Royal Portrush, he was summoned for a drug test, and after disclosing his medicine on the form prior to taking the test, he was still deemed to have failed because the beta blockers were said to be performance enhancers.

He was given a harsh two-year ban that he said nearly broke him completely.

I couldn’t go (play on the Eisenhower Trophy team) because of a two-year drugs ban was simply too much for me to take in. It felt like my life was over,” Bezuidenhout wrote. “I was aware of how labels like that are hard to shake off and I reached a very low point in my life, I was banned from playing the only thing in the world I loved, the game of golf. I was inconsolable.”

The ban was eventually shortened to nine months after it was decided the drugs were not enhancing his performance. In his first event back from suspension, he won by seven shots in a mini-tour event.

This week in Spain, Bezuidenhout held off the likes of Jon Rahm and Sergio Garcia to win his first European Tour title.

The win seemed to be in the offing as he posted five top-15 finishes this season on the European Tour, and entering Sunday at Valderrama with a five-stroke lead and final-round pairing with Rahm, Bezuidenhout didn’t flinch. He shot a 1-under par 72 to take the win by six shots.

“Really pleased with the way that I played,” he said, speaking to thousands on the grounds and millions around the world. “To finish it off, it’s unbelievable.”

We will see you in two weeks at #TheOpen pic.twitter.com/hd4iQQXZHq