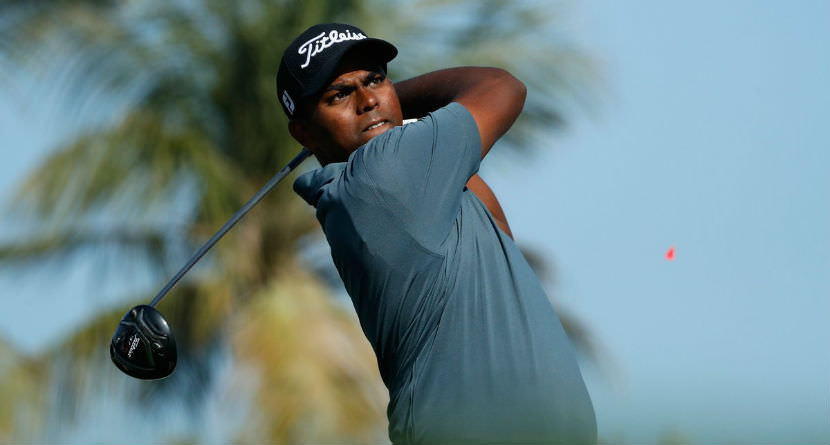 What’s the longest streak of birdies you have ever made in a row? Whatever it is, 17-year-old Rayhan Thomas probably has you beat. On Tuesday, the young Indian prodigy made history when he carded nine birdies in a row at the Dubai Creek Open on the MENA (Middle East, North Africa) Tour.

The incredible run began on the second hole at Dubai Creek Golf and Yacht Club, which is conveniently Thomas’ home course, and didn’t end until he made a par on the par-4 11th. The streak matched the world record for most consecutive birdies in an Official World Golf Ranking event held by Mark Calcavecchia at the 2009 RBC Canadian Open.

INCREDIBLE RUN! @RayhanThomas shows his card after firing 10-under 61, highlighted by world-record equalling 9 birdies in a row! pic.twitter.com/WIDQsWWSeU

“Yeah, it was fun. It was a good run of birdies,” Thomas told reporters after the round, according to Golf Digest. “I just stayed pretty much in the moment and let it happen. It just felt natural.

“I knew I could go low, especially around my home track where I know the greens so well. So I just let everything flow. I didn’t know about the record, but that’s nice. That’s pretty cool.”

2011 Open Champion Darren Clarke was paired with Thomas when he accomplished the feat and clearly was impressed.

“Rayhan is a huge talent, obviously,” said Clarke. “The way he was playing, this is the worst he could have shot…Rayhan’s game is trending in the right direction and I think he has a great future of ahead of him. I wish him the very best.”