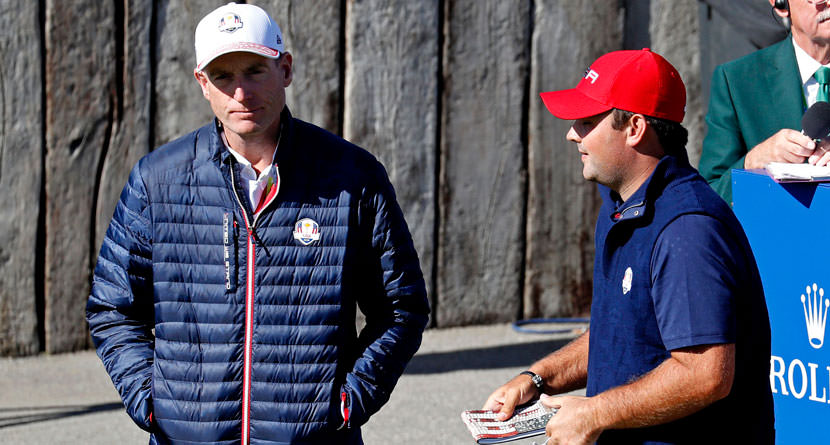 Team USA’s largely disappointing week at Le Golf National outside of Paris for the 42nd Ryder Cup matches ended with some verbal fireworks lobbied by one of the team’s most polarizing members, Patrick Reed.

The final question of the team press conference was directed at Jordan Spieth and Reed, asking if either was surprised that they didn’t play together over the three days of the events considering their 5-1-2 record as a duo in the past two events.

After making eye contact with one another, Spieth answered.

“No, we weren’t (surprised),” Spieth said. “We were totally involved with every decision that was made. Jim (Furyk) allowed it to be a player-friendly environment. We were involved and we thought that the teams that came out of our four-man squad, we had two potentially fantastic teams, and we went out confidently and tried to play our best.”

Before Reed could respond, Furyk spoke up saying, “Jordan and Patrick have been great in the past. I felt like, you know, whether that’s a point of contention or not, I felt like we had two great pairings out of it. So it was totally my decision and my call.”

Reed was able to say his piece when contacted by The New York Times’ Karen Crouse later in the night, and the Masters champion didn’t hold back.

“The issue’s obviously with Jordan not wanting to play with me,” Reed said. “I don’t have any issue with Jordan. When it comes right down to it, I don’t care if I like the person I’m paired with or if the person likes me as long as it works and it sets up the team for success. He and I know how to make each other better. We know how to get the job done.”

Reed’s critique is valid in that Furyk outsmarted himself by splitting up teams w/proven success in the Ryder Cup. But Spieth’s desire to play w/JT was vindicated by their 3-1 record and passionate play. Reed was so bad, esp. on Sat., it’s hard to say he should’ve played more.

Spieth, who played all four team sessions with Justin Thomas, went 3-1 before losing his singles match on Sunday. Reed, conversely, was paired with Tiger Woods and lost their opening fourball match to Tommy Fleetwood and Francesco Molinari. The Reed-Woods pairing sat in the afternoon on Friday, lost again on Saturday morning and Reed was benched in the afternoon in favor of Bryson DeChambeau playing foursomes with Woods.

“For somebody as successful in the Ryder Cup as I am, I don’t think it’s smart to sit me twice,” Reed said.

He also described the pairings decisions to be a “buddy system” that only takes into account the opinions of a certain few players, intimating that he wasn’t one of them.

Whether on not a Spieth-Reed pairing is in the offing for future team events remains to be seen, but if they do, there may be some fences that need to be mended.