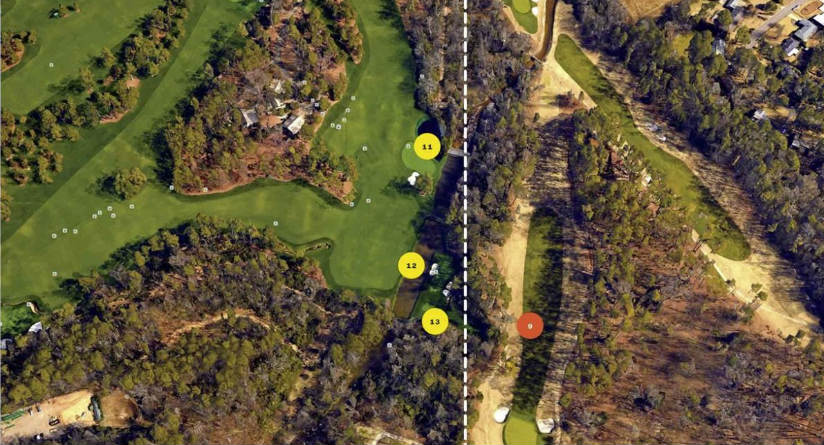 On Monday, news broke that the home of the Masters has reportedly reached a deal to acquire land from neighboring Augusta Country Club. While the details were not disclosed, it all but confirms the rumors that have been circulating since 2016 about the possibility of lengthening its iconic par-5 13th hole.

Now with their desired land in hand, the question becomes, what exactly do the men in green jackets plan on doing with it?

Augusta National Golf Club has finally secured the last piece of its course’s border and made room for the possible expansion of its iconic 13th hole by acquiring land from its neighbor Augusta Country Club.

In a letter to the Augusta Country Club membership dated Aug. 4, club president Jay B. Forrester said “the Board of Governors is pleased to confirm that we have reached an agreement with our friends and neighbors at Augusta National Golf Club for its purchase of property at our northwest boundary.”

Masters Tournament and club chairman Billy Payne has not commented on the reported transaction – which has not yet been submitted in the public records. Officials at Augusta Country Club also declined to comment.

The sale, the amount of which was not disclosed in the letter to Augusta Country Club members, was recently finalized and approved by the Board after “many months of collaborative and cooperative dialogue” with Augusta National.

The sale includes the land on the Augusta National side of Rae’s Creek where Augusta Country Club’s current par-5 eighth green is situated as well as the stretch situated high above Augusta National’s border where the current 392-yard par-4 ninth hole is located. Carts and golfers playing the ninth hole were often visible to patrons in Amen Corner through the trees during the Masters.

Augusta National will cover the costs of construction for portions of the renovated Donald Ross course across Rae’s Creek that is displaced by the land acquisition, both parties confirmed.

The purchase of Augusta Country Club’s ninth hole gives Augusta National room to move the 13th tee back 50 to 60 yards, making it a 560-yard hole that would again require a powerful drive to get far enough around the corner to invite taking on the green in two.

“We think there are multiple options where we could increase the difficulty of the hole and restore the shot values, only one of which deals with extending the length,” Payne said in 2016. “So we are in the middle of all of those studies, a lot of arithmetic, lot of design issues.”

Augusta National’s plans for the 13th hole haven’t been disclosed.

A letter from Augusta Country Club’s Board of Governors was sent to the membership at the end of last week.

Well the rumor is true about ACC & Augusta National as first reported by @GetAustinRhodes and his attachment. pic.twitter.com/SVh7v153Iq