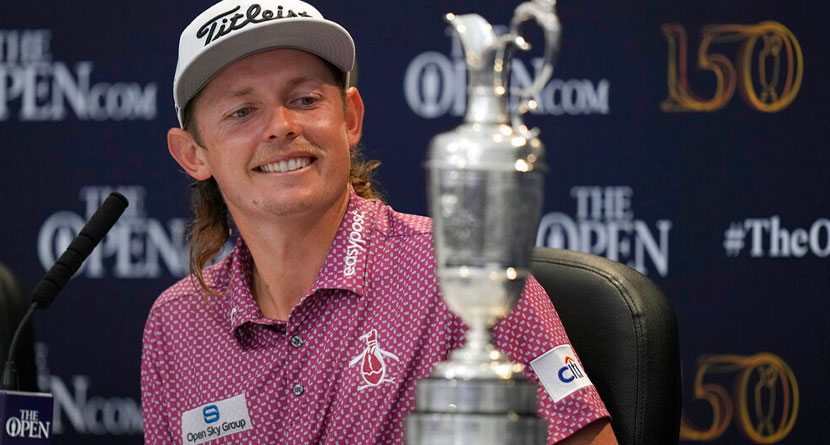 Less than a month removed from claiming the Claret Jug, the Champion Golfer of the Year is reportedly heading to the LIV Golf Series.

The Telegraph has reported that Cameron Smith will be joining the breakaway series starting with their next event in Boston, signing a $100 million deal.

Smith, ranked 2nd in the Official World Golf Rankings, would be the top current star signed by Greg Norman and the Saudi-backed series. He has won six times on the PGA Tour, and captured his first major championship with a stonking Sunday at St. Andrews to claim the 150th Open Championship.

After hoisting the Claret Jug last month, Smith was asked about a potential deal with LIV, but deflected.

“I just won the British Open, and you’re asking about that,” Smith responded. “I think that’s pretty… not that good. I don’t know, mate. My team around me worries about all that stuff. I’m here to win golf tournaments.”

“I think that’s…not that good”

Open Champion Cameron Smith’s response when asked about rumours linking him with move to LIV Golf series following triumph.
Didn’t like being asked. Didn’t rule it out: 👇 https://t.co/Yygb7GxC1G pic.twitter.com/fh4xs4Avfb

Rumors indicate that Smith will be joined by fellow Aussie Marc Leishman. Another Australian professional golfer, Cameron Percy, told RSN Radio Australia on Monday that both were headed to the LIV series.

.@boston_capper was in shambles when Cam Percy confirmed that Cam Smith and Leishman are headed to #LIVGolf 🥲 pic.twitter.com/PZH5t6VN8k

In his press conference ahead of this week’s FedEx St. Jude Championship, Smith once again offered no comment on the LIV reports.

“My goal here is to win the FedEx Cup playoffs. That’s all I’m here for,” said Smith. “If there’s something I need to say regarding the PGA Tour or LIV, it will come from Cameron Smith, not Cameron Percy. I’m a man of my word, and, um, whenever you guys need to know anything, it will be said by me.”

‘You’ll hear news from me, not Cameron Percy.’ ❌

Cameron Smith says any news about his future on the PGA Tour or joining LIV Golf Series will only come from him, insisting he’s focused on the FedExCup Playoffs. 🗞️ pic.twitter.com/FuNjbxNlkB

Perhaps contributing to Smith’s and Leishman’s willingness to defect from the PGA Tour was a report that LIV will host three events in the golfers’ native Australia starting in 2023.

The PGA Tour does not have any Australia-based events on their 2023 calendar and hasn’t hosted an event there since the 2019 President’s Cup at Royal Melbourne. The American team, led by playing captain Tiger Woods, captured their 11th Presidents Cup victory there with a 16-14 win.

The Smith news broke on the same day that a California district court heard arguments in the first legal battle between the PGA Tour and LIV Golf.

A San Jose judge denied a motion by three LIV players – Talor Gooch, Hudson Swafford, and Matt Jones – who filed a temporary restraining order to allow them to participate in this year’s FedEx Cup Playoffs.

Three LIV players – Talor Gooch, Hudson Swafford and Matt Jones – had their temporary restraining order injunction to play in the FedEx Cup Playoffs ruled upon in a California courtroom on Tuesday afternoon. https://t.co/SkvXfoDACY

Smith’s reported deal with LIV will not go into effect until after the completion of the FedEx Cup Playoffs. That will allow the world no. 2 to compete for the $18 million top prize for the FedEx Cup champion.

The season-ending Tour Championship takes place the last week of August, while the next LIV event will be contested the following week at The International just outside of Boston.

If reports are true on the details of Smith’s deal, he would be the fifth golfer signed to LIV for $100 million or more.