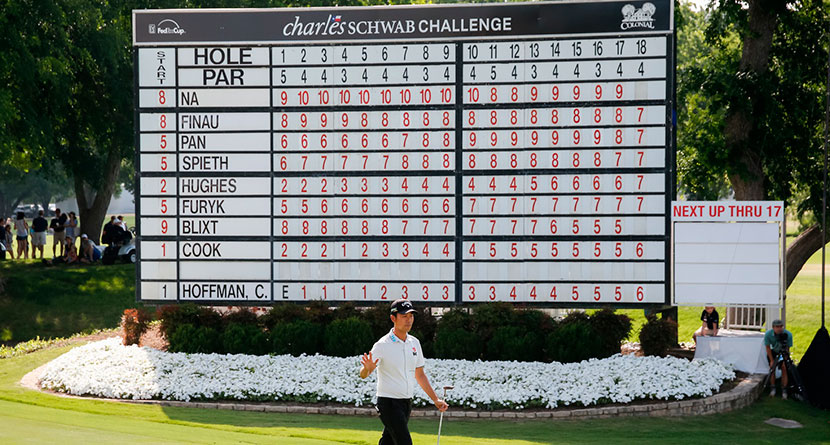 The PGA Tour is set to announce its version of a revised schedule that will restart in just under two months at the Charles Schwab Challenge at Colonial Country Club on June 11 without fans, according to a report Tuesday night from GolfDigest.com’s Brian Wacker.

Wacker filed his report following conversations with sources “not authorized to speak on the Tour’s behalf,” but noted that the Tour discussed its plans on a conference call with the Players Advisory Board earlier in the day.

The Charles Schwab Challenge, which as of this writing is still slated as the Tour’s restart date on May 21, is expected to replace the RBC Canadian Open on the June 11 date as a result of an expected cancelation of the event at St. George’s Golf & Country Club in Ontario.

From there, it is expected that this week’s originally-scheduled RBC Heritage played at Harbour Town will slide into the date vacated by the U.S. Open.

While fans will not be in Texas at the restart, “as the Tour looks to follow health and safety guidelines set by government and health officials, other early tournaments also are expected to be played without spectators,” according to Wacker’s report.

Expanded fields and opposite-field events are expected as the Tour attempts to salvage as many playing opportunities for members as possible.

Skeptics of the Tour’s aggressive restart, such as Golfweek and Golf Channel contributor Geoff Shackelford, call the schedule “wildly optimistic” given the uncertainty of various logistical roadblocks.

BREAKING: The PGA Tour will announce this week that it plans to resume its season June 11-14 at Colonial, according to multiple sources. Here is what the schedule is expected to look like when it gets released: https://t.co/J9v1ey9eEU

“It’s a little hard to picture, but we’ll go with it and watch how this is rolled out,” Shackelford wrote. “Namely, will there be any suggestion of measures taken to ensure all can safely travel to and play in these events? What precautions are being taken for everyone else besides players?”

If there is any silver lining for optimism given Shackelford’s pertinent questions, it’s that PGA Tour commissioner Jay Monahan was named to President Donald Trump’s new council for re-opening America on Tuesday, which would presumably give him insight into timelines being discussed at the very highest levels of the U.S. government.