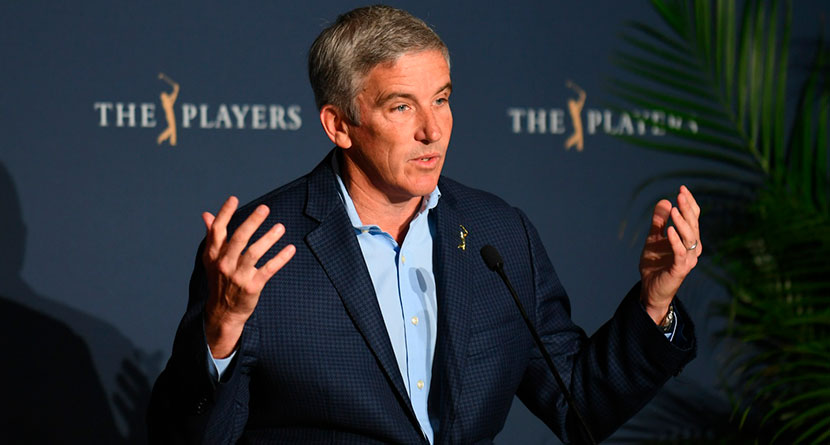 With just over 50 days separating the PGA Tour from its planned restart date, a plan for a path forward is starting to come into focus.

According to a report from The Guardian’s Ewan Murray, the PGA Tour is working to procure one million coronavirus tests in order to test players both before and during tournament weeks as they eye a mid-June restart to the season.

“The rigorous testing procedures will involve players, caddies and officials being sent testing kits – already on mass order – to their homes, with a further and immediate check required if anyone has traveled to a tournament by air,” Murray wrote. “Daily tests will subsequently be undertaken by each individual in tournament week, with anyone returning a positive result asked to self-quarantine for 14 days.”

The first four events of the Tour’s revamped resumption schedule — the Charles Schwab Challenge, the RBC Heritage, the Rocket Mortgage Classic and the Travelers Championship — will not have fans in attendance, but estimates are that 700-800 people will be required to be on site between players, caddies and other essential personnel.

Murray’s report also stated that those players and caddies outside of the country will be allowed to travel into the U.S. on the basis of essential travel to compete.

In a statement, the Tour denied the number of tests being reported was correct, but once again confirmed the requirement to have them readily available should the Tour want to restart on the timeline it had laid out.

“The Tour is still examining the issue of testing in consultation with leading medical experts,” a Tour spokesperson told The Guardian. “We have on numerous occasions said publicly that Covid-19 testing as it stands today is most critical across the healthcare world and in our communities.”

Speaking last week with NBC Sports’ Mike Tirico, PGA Tour commissioner Jay Monahan stressed the need for mass testing as a means to the Tour getting started once again.

“We need to have widespread, large-scale testing across our country,” Monahan said on NBC Sports Network’s “Lunch Talk Live” with Mike Tirico. “We’re going to need to be able to test players, caddies and other constituents before we return, but we need to do so in a way that’s not going to take away from the critical need that we’re currently facing, and we feel confident, based on the advice that we’re getting from medical experts, that we’ll be in that position.

“We’re going to need rapid-response, large-scale testing. The continued emergence of testing and new testing protocols is very encouraging, and we, like other sports, are spending a lot of time relying on experts and identifying the resources that we need to come back in a safe and responsible way. This is as important as the schedule itself.”

As of April 20, about 4 million coronavirus tests had been administered across the entire United States, adding some less-than-ideal optics to the Tour’s plan to acquire a quarter of that number to resume their season.

While things continue to move rapidly, supplies can change and tests can be procured via private businesses, but the Tour must weigh the public relations impact testing professional athletes in order to compete has against the optics of other citizens potentially being without testing opportunities.