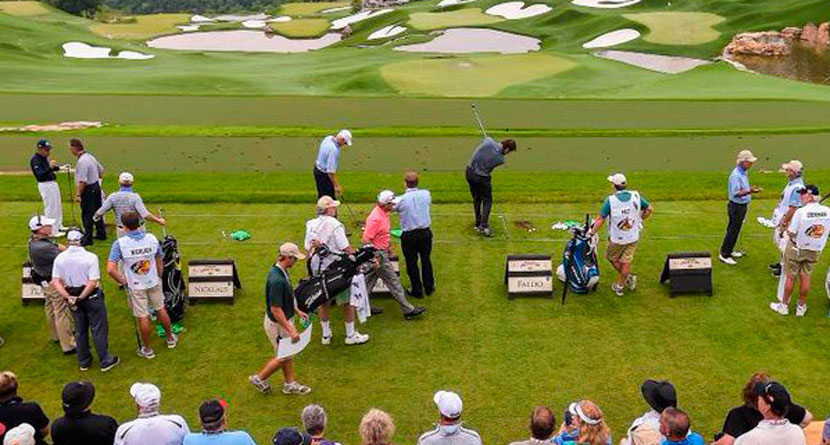 The PGA Tour isn’t messing around when it comes to driver testing this season.

At last week’s Safeway Open, just the second event of the 2019-2020 schedule, a report from Reuters, which has been corroborated by journalists at GolfChannel.com as well as Golf.com, claimed that five Tour pros had their drivers pulled from their bags for failing the CT test that determines the conformity to the rules of the clubs.

Reuters’ Andrew Both wrote on Sunday evening that Corey Conners, Robert Streb, Jason Dufner, Michael Thompson and Mark Hubbard were “believed” to be the players whose drivers did not pass the test. Both also reported that the drivers that failed the test were manufactured by Titelist, TaylorMade and Cobra.

Starting this season, the PGA Tour will begin testing drivers in play at events. The attached memo was sent to players in advance of Greenbrier. pic.twitter.com/OnduVCYAnR

In the first publicized failings of the new testing protocols, the players and manufactuer representatives were skeptical of the results. Aside from sending their clubs back for additional testing, players posed questions to Tyler Dennis, the senior vice president & chief of operations for the Tour, who is in charge of the new program.

“We will not be commenting publicly on items such as the PGA Tour tournaments scheduled for testing or results from testing,” the Tour’s vice president of communications Joel Schuchmann told Reuters in an emailed statement.

The Tour began testing the equipment stored in the Tour trucks in 2014 at random events. They would have the USGA Equipment Standards Team conduct tests on drivers in tour vans to determine their Characteristic Time (CT), which is a measure of the springiness of the hitting area, according to Golfweek.com’s David Dusek.

In a memo sent to PGA Tour players last month, the Tour explained that their testing will no longer pull driver heads from the equipment trucks that populate Tour events, but directly from the bag of those participating in the event.

“Recently, we have become aware that drivers in play on the PGA Tour may be exhibiting a trait whereby through normal use, the clubface ‘creeps’ beyond the allowed CT limit under the Rules, despite having conformed to the CT limit when new,” the memo said. “When such a situation occurs, in accordance with the USGA’s Notice to Manufacturers dated October 11, 2017, the club is deemed to have become damaged into a non-conforming state and may no longer be used in competition.”

Players are randomly selected to have their in-play drivers tested in order to ensure conformity under the USGA’s CT limits. The test, which takes about 15 minutes to perform, will note the club’s serial number, how it performed on the test and then will be placed in one of three categories (via GolfChannel.com):

“Complying with this program will be considered a condition of entry for the tournament,” the memo said. Players can voluntarily submit their drivers for testing should they so choose.