PGA Championship Moving to May in 2019 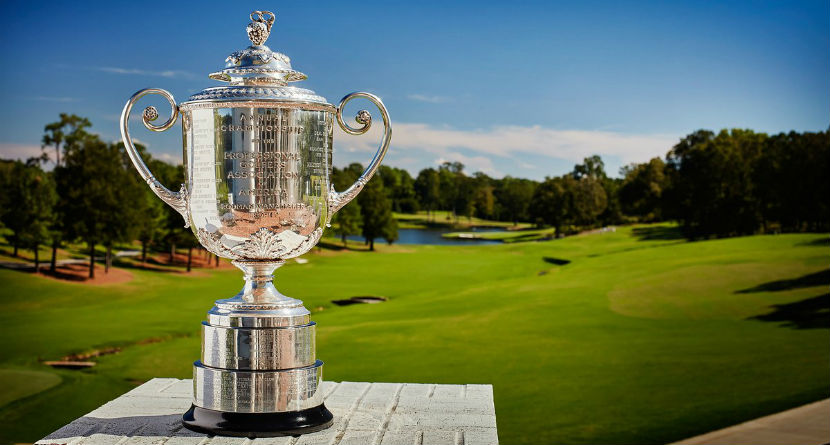 If you’re a fan of the PGA Championship being played in August, you better soak it in this week because the final major’s spot on the schedule is changing.

On Monday, the AP reported that the year’s “final” major of the year will be moving to May beginning in 2019 at Bethpage Black. It will be the first time in 70 years the PGA of America will host its championship in the month of May.

Players are allowed to wear shorts during practice rounds at the PGA Championship. That won’t be necessary in two years when it moves to May.

The PGA of America is moving its major championship to May for the first time in 70 years when it goes to Bethpage Black on New York’s Long Island in 2019 as part of a long-term plan that involves a major shift in the golf calendar, including The Players Championship going back to its March date, The Associated Press has learned.

Two officials involved in the discussions say the PGA of America and PGA Tour will discuss details of the move as early as Tuesday at Quail Hollow Club, site of this year’s PGA Championship. They spoke to the AP on condition of anonymity because the move has not been announced.

The change has been in the works for four years, one official said. The catalyst behind the movement was golf’s return to the Olympics, along with the PGA Tour’s desire to wrap up its FedEx Cup before the NFL begins.

The move to May also puts the PGA Championship in the middle of the major championship season — after the Masters, before the U.S. Open — instead of being stuck at the end in August when courses typically are softer because of the summer heat and sports fans have one eye turned toward football.

According to the report, the move switch is part of a long term plan that involves a significant shift in the golf calendar, including moving The Players Championship back to its original March date.

The #PGAChamp will officially move to May beginning in 2019 at Bethpage Black, according to an @AP report: https://t.co/CKLwizoEhf pic.twitter.com/ID3Pp83IVc

PGA of America CEO Pete Bevacqua explained in June that the organization’s analysis of a possible date change accelerated last year amid discussions with the PGA Tour.

“The world is changing around us with the Olympics, with the possible changes to the FedExCup. And then you start to think about a PGA Championship conducted in May,” Bevacqua said, according to Golf Channel. “What other parts of the country could that open up? Following the Masters and now being the second of the four majors instead of the fourth. A stronger television market.”