Report: Tiger To Be Paired With Phil At Safeway Open 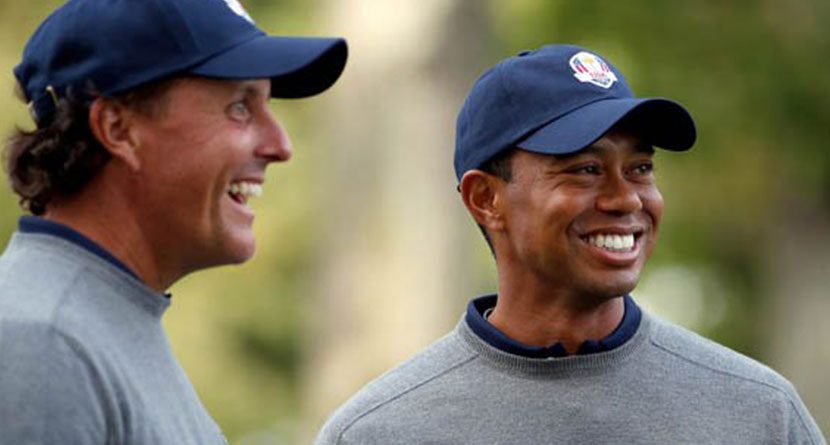 As if the anticipation wasn’t already at a fever pitch for Tiger Woods’ return to PGA Tour golf this coming week at the Safeway Open, a San Francisco Chronicle report has taken it to another level.

The Chronicle‘s Ron Kroichick had the scoop.

Tiger Woods definitely is coming to Napa next week — and Woods will play alongside longtime rival Phil Mickelson in the first two rounds of the Safeway Open.

The PGA Tour doesn’t release pairings until Tuesday of tournament week, but a source told The Chronicle that Woods and Mickelson will play in the same group Thursday and Friday at Silverado Resort. Mickelson lobbied for the pairing, publicly saying he wanted to play with Woods.

“I’m hoping we can get paired together,” Mickelson told espn.com Sept. 7. “That would be really fun. I would love it.”

Woods and Mickelson probably will tee off Thursday afternoon, so Golf Channel can carry Woods’ first shot in a tour event in more than 14 months. Woods and Mickelson then would play in the “morning wave” for the second round Friday.

Tiger and Phil on the west coast? Primetime golf with the most anticipated return of any athlete this decade? Yeah, you could say we’re excited.

What golf fans look like when they hear the Tiger-Phil pairing at the Safeway might actually happen pic.twitter.com/W2ub3etdP2