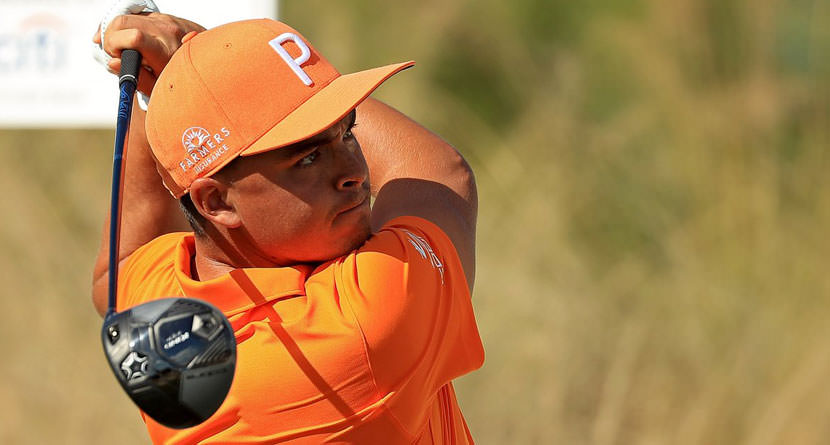 There Rickie Fowler was again on Sunday at a major tournament, sitting outside the scoring tent waiting for the winner to come off the 18th green. Fowler, dressed in his burnt orange attire, does the classy thing and shakes the hand of the winner. On Sunday, it was Patrick Reed at the Masters and Augusta National. In other scenarios, it is Rory McIlroy, Martin Kaymer or Brooks Kopeka. Take a look at almost every major the last four years and Fowler’s name will be near the top of the leaderboard.

Near is the important word. It’s never alone at the top.

Fowler is golf’s version of always a “bridesmaid, never a bride.” He has 13 runner-up finishes on the PGA Tour, only four victories, and has had eight top-five finishes in majors in the last five years.   Fowler was in the top five twice in 2017 with fifth-place finishes at the U.S Open and PGA Championship. He put the pressure on Reed on Sunday, birdieing 18th the move to 14-under par. Fowler had to wait until Reed’s putt on 18 for par sealed his third second-place finish at a major.

Huge putt by Rickie Fowler on the 18th hole!
He ends the round one shot behind Patrick Reed. #themasters pic.twitter.com/vpfPaBhnR2

“Patrick, he’s not scared,” said Fowler, who since 2013 has eight top-10s in majors, the most without a victory. “He’s not scared on the golf course. He’ll play aggressively. He’ll play his game. He won’t back down.

That’s what Fowler has become on tour, the player who makes you earn a win. Fowler finished fifth in the British Open in 2011 and was top five in all major championships in 2014, including runner-up finishes at the U.S. and British Opens. For his career at majors, he has 14 top-25 finishes.

Fowler does have wins in big tournaments, with victories at Well Fargo, Deutsche Bank and a win at The Players Championship. Those victories are against some of the world’s greatest players.

All that he’s missing on his resume is a win in a major. The U.S. Open at Shinnecock Hills on Long Island in June. Dustin Johnson, Rory McIlroy and Justin Thomas are the early favorites. Fowler is highly thought of, currently at 15/1. Chances are Fowler will have a say in who wins.

The bigger question is whether Fowler will finally step up to the altar and claim that first major championship.