Fowler, Thomas Roll Back The Clock With Persimmons, Balatas 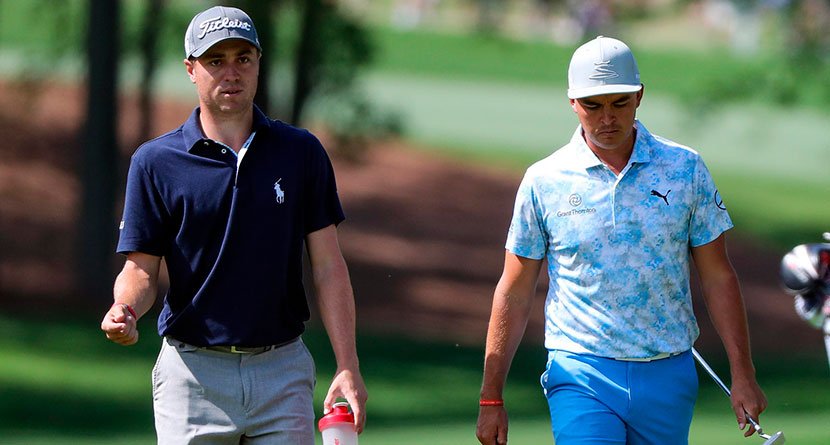 Technology in golf has rapidly improved over the last 20-30 years, but still golfers of a certain age lament the loss of shot-making and skill required by players from previous generations.

Whether it be persimmon wood drivers or wound golf balls, the nostalgia of yesteryear is probably stronger than the reality that playing golf with titanium drivers and solid-core golf balls is much easier for players at every level of the game.

Occasionally, it’s good to have those old feelings and opinions reinforced, which is what Rickie Fowler and Justin Thomas were able to do over the weekend when the two Tour stars procured some equipment from the mid-1990s and played a match around Medalist Golf Club in Florida.

Fun game with @rickiefowler today… Persimmons and Tour Balatas (I brought back the tie as well!). The audio on some of the shots today were niiiiiice. Safe to say, I will be asking for rick as a partner next time we do this #hecrushedme #oldschoolgolf

“Fun game with Rickie today: persimmons and Tour Balatas,” Thomas captioned his Instagram post. “The audio on some of the shots today were niiiiiice. Safe to say, I will be asking for Rick as a partner next time we do this.”

Thomas added another piece to the turn-back-the-clock idea bringing back the shirt-and-tie ensemble he debuted at the 2017 Open Championship at Royal Birkdale. As for the outcome, Thomas intimated in his caption, Fowler dusted the floor with him.

Fellow Tour pro John Mallinger asked for the scores of the match, to which Thomas responded, “Rick shot 70, which I thought was really impressive. I… didn’t shoot 70.”

“This is sick!” he wrote. “Once a year, the Tour should do a throwback event and make everyone play with these. Although it sounds like you may not be all for that.”

Not a bad idea.