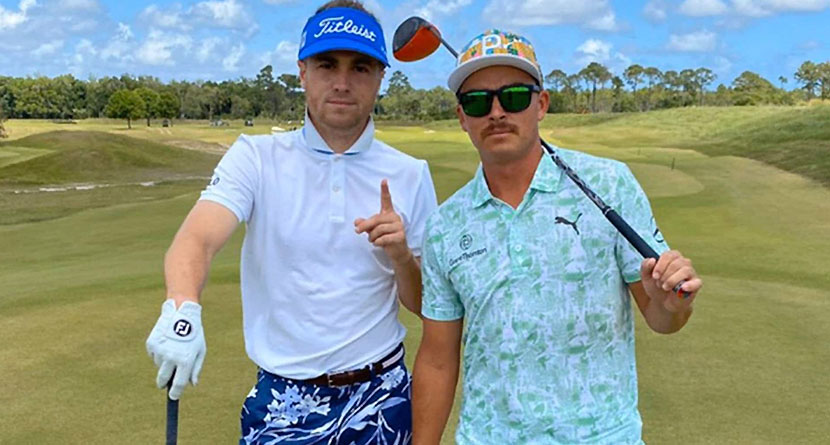 With no officially-sanctioned competitive golf on the slate for the next few months, two of the PGA Tour’s best players are trying to make lemonade out of the lemons provided to them by the coronavirus pandemic.

Despite both begin extremely right-handed, they were able to procure the necessary equipment to go one-on-one for 18 holes of switch-handed golf, which despite their relatively solid swings, resulted in scores they likely haven’t shot since their junior golf days.

What a day! I think we succeeded in the mix matched outfits and trying to look the part of playing lefty…I snuck out the win with a quality back nine to post 94…plenty more to be seen in my story!

Fowler erased a five-shot deficit through nine holes to best Thomas, 94-101, and the frustration of JT’s back-nine meltdown were apparent in the documentation of the round, which can be found in the highlights of Fowler’s Instagram page if you’re looking for 15 minutes to kill.

Their lefty swings… watch till the end ? pic.twitter.com/UINJWhItrt

The pair’s decision to stand on the other side of the ball got the attention of two of their fellow pros, in particular: Brooks Koepka and Dustin Johnson. Koepka took a break from his normal practice session with swing instructor Claude Harmon III to take a swipe at an 8-iron.

Koepka calls out JT and Fowler after showing off his left-handed game. pic.twitter.com/GVn0hqBEa8

“Where you at JT, Fowler?” Koepka playfully says to the camera showing the 8-iron he just crushed. “Come get some.”

Harmon panned down to the stats to show that Koepka’s left-handed 8-iron carried 196 yards. before bombing a left-handed driver 293 yards in the air.

For DJ’s part, the left-handed content machine went into overdrive as TaylorMade pulled out a video from its archives of DJ at an equipment shoot from late last year hitting a similar left-handed driver 294 in the air and 311 yards total.

Sensing a trend so we’re sending our best lefty, @DJohnsonPGA, to the plate. ? pic.twitter.com/DRowE9WDM9