Fowler Says Tiger is Driving the Ball Way By Him 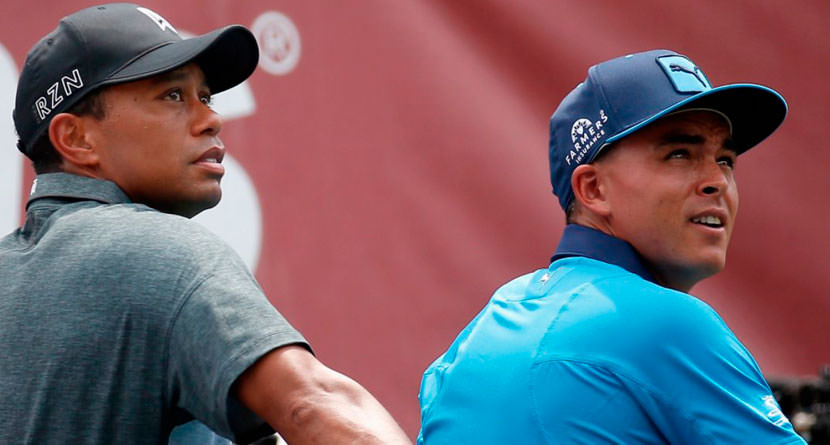 A four-word quote from Rickie Fowler at the Cobra/Puma launch of the company’s new line of F8 drivers, fairway woods, hybrids and irons has the hype machine surrounding Tiger Woods return to competitive golf in two weeks in overdrive.

Speaking to Golf.com’s Dylan Dethier, Fowler confirmed rumors swirling that Woods is hitting the ball as far as ever. To be fair, it was Tiger who started those rumors during his podcast appearance with Geno Auriemma.

Asked Rickie if the rumors are true that Tiger’s been hitting it by him in practice at Medalist.

So yeah, Tiger’s back

Dethier took the tweet’s viral nature to explain how the whole thing came about.

On Tuesday I attended a Cobra/Puma media event at which Cobra introduced its new line of clubs. Rickie Fowler and Bryson DeChambeau were there, too, hitting a series of shots and taking questions in an open-forum Q&A.

After their demo, I got a couple minutes of one-on-one time with each of them. By the time I got to Fowler, he was nearly out of time, but I squeezed in a couple questions about his offseason mentality and about life in Jupiter this time of year before his handler told me to wrap it up.

I was eager to fire off one more question. As a recovering mini-tour player and one-time resident of the greater West Palm Beach area, I hear my share of Tiger-related rumors, most of them unsubstantiated. But the word from Medalist, where Woods and Fowler both play, is that the 14-time major champ is oozing confidence and pounding his tee shots — outdriving Fowler in their games by 20-30 yards.

As I thanked Fowler for his time, I asked him about it.

“So, is it true that Tiger’s been hitting it by you in practice at Medalist?”

For those who missed Woods’ appearance on Auriemma’s podcast, here’s the pertinent quote from Tiger via ESPN.com’s Bob Harig.

The 41-year-old Woods, who is making his latest comeback from fusion surgery in his back in April, told Auriemma that he has been awestruck at how far he has been hitting the ball while preparing to return at the Hero World Challenge on Nov. 30.

“I can’t believe how far I’m hitting the golf ball,” said Woods, who has not played competitively since February. “I’m back to hitting it my full numbers [yardages] and not really trying to do that. I didn’t realize how much I had dropped off because of the pain in my back and from me going at it and hitting it normal just because I just lived it from day to day and I really couldn’t tell the difference. But now I can tell the difference.”

For now, we’ll have to take Tiger and Rickie’s word for it, but on Nov. 30 we’ll be able to see for ourselves as Woods tees it up in the Hero World Challenge.